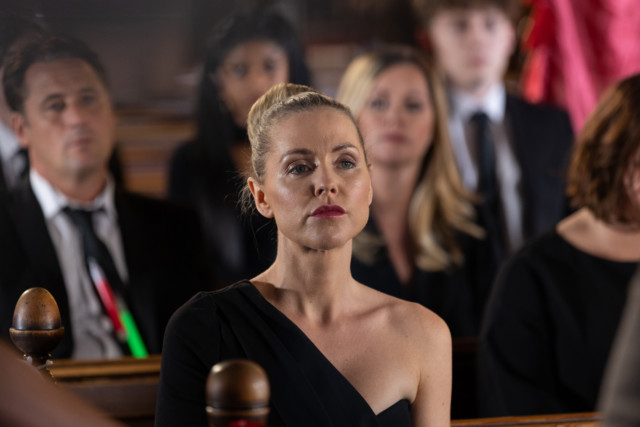 LUKE Morgan’s loved ones gather around for a final goodbye after his tragic death in Mallorca.

But one surprise guest will be disturbing their mourning. Get the lowdown on all of this week’s Hollyoaks drama. But as emotions are running high, a surprise guest rattles Luke Morgan’s loved ones

Cindy Cunningham (portrayed by Stephanie Waring) is struggling to plan her late fiancés funeral on her own this week.

As Channel 4 viewers may remember, Luke Morgan fell to his death during a celebratory trip for his wedding in Mallorca after being a regular face in Hollyoaks for more than two decades.

Aware of her struggle, Cindy’s family come up with ideas to help her organise Luke’s funeral.

Later on, they all have a decision to make as Luke gave his stamp of approval on all of their ideas.

The event finally goes ahead and Cindy makes the surprise decision to leave Luke’s son Ollie (Gabriel Clark) to give his eulogy.

But there’s trouble on the horizon. The youngster finds it hard to make it through the eulogy without shedding a single tear, prompting Cindy to step in.

In doing so, she encourages Luke’s nearest and dearest to look at the positives of his life, despite his last few years being tarnished by his struggle with dementia.

Emotions are running high but a shocking revelation from a surprise guest causes drama at the funeral.

Scarlett hasn’t been seen in Chester since 2018 – what does she have to reveal? Ollie will wave the village goodbye

3. Ollie gets ready to leave

Following his father’s funeral, Ollie gets ready to leave Hollyoaks for a job in Canada.

But before he can enjoy his final day before packing up and leaving, Ollie is eager to say goodbye to Brooke Hathaway (Tylan Grant) with whom he shares a son called Thierry.

Brooke later admits to Nancy that they’re struggling with the idea of saying goodbye to Ollie – will they avoid it altogether?

Ollie gets a loving gift for his send-off from Tony and Imran.

Could he come back to Hollyoaks? Cindy crumbles under the pressure without Luke

Meanwhile, Cindy desperately tries to get on with her everyday life.

But when the freezer blows at the burger stand, she’s driven to tears.

This leads to her wondering whether she can cope without Luke at all.

In later scenes, the family come up with a promotion as a loving tribute to Luke.

Will it help Cindy? Serena recovers from her accident

Teen athlete Serena Chen-Williams (Emma Lau) could see her future on the line after she gets into an unfortunate accident.

This week, she’s rushed to the hospital and her family have an anxious wait to go through.

Sadly, the Chen-Williams later get heartbreaking news about Serena’s recovery.

But will they be able to forgive Serena’s half-sister Maxine Minniver (Nikki Sanderson) for her part in the accident? Misbah gives evidence against her rapist

Coming up, Peri Lomax and Misbah Maalik (Harvey Virdi) are both called in to give their statements about the doctor.

However, a heated confrontation later has unexpected consequences for Misbah.

Although Ali was left to walk free from the courtroom as Misbah was about to the stand, she’s finally able to reveal some shocking evidence of her own and give her testimony about his character.

Will it be enough to bring him down? After a lot of pain and resentment, Bobby Costello’s (Jayden Fox) relationship with his mother Mercedes McQueen (Jennifer Metcalfe) could be on the mend.

But when he fails his geography test, the youngster resorts to acting out and wants to go back to school.

Thankfully for Mercedes, who wants nothing more than to get things back on track, gets the luck she needed with an extraordinary gift that helps her bond with her son.

However, things take a turn when the McQueen family gets a handwritten card addressed to Wendy.

Is there more trouble brewing? Bobby gets a horrific message

While this remains to be seen, Mercedes gets an idea as Theresa gives her some wise words and she’s more than determined to show Bobby she’s trying to fix their relationship.

But a sinister chess metaphor reminds Mercedes a little too much of serial killer Silas Blissett and, suspicious, she remains on the lookout.

In later scenes, Mercedes drops Bobby off for grief counselling with Honour and the pair make a breakthrough.

The relief is short-lived as Bobby receives a threatening message soon after. Sienna is ready to avenge Brody – but hatches a plan slowly

9. Sienna tries to take Warren down

Sienna Blake (Anna Passey) found out the truth about Brody’s death and is ready to make Warren Fox (Jamie Lomas) pay for his actions.

Coming up, Norma Crow sends the both of them to make a purchase on her behalf and Warren gets distracted by the prescription pills.

Sienna sees this as an opportunity but will she really jump on it?

This remains to be seen but Sienna is all set on going ahead with her sinister plan against Warren – although a grand gesture could ruin everything.

Will she ever get revenge?

Love Island to axe TWO contestants in another brutal dumping