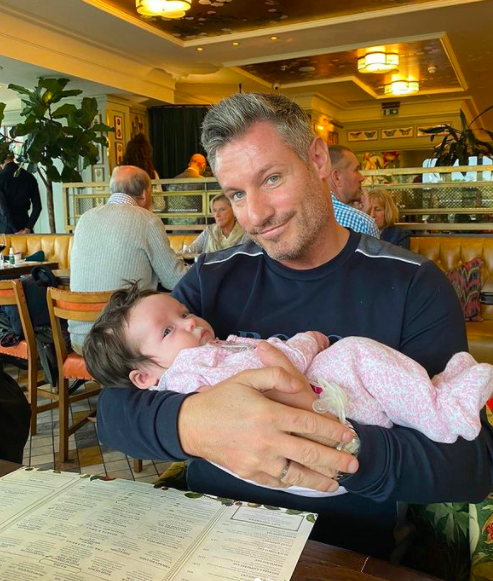 FORMER EastEnders star Dean Gaffney has been snapped cradling his beautiful granddaughter Mimi in his arms.

Dean, 43, posed for several photos with the newest addition to his family after heading out for a meal with his daughter Chloe and her baby girl.

The EastEnders favourite, who played Robbie Jackson on and off for 16 years, has also told his fans just how besotted he is with his granddaughter.

Sharing the photos on Instagram on Tuesday, Dean gushed: “It’s a different kind of love…

Dean revealed in July that his 24-year-old daughter Chloe and her partner Declan had welcomed Mimi into the world.

“I’m so proud. Lots of my mates are becoming dads, but I’m a grandad at the same age,” Dean said.

“The only person I know who’s in the same boat as me is Danny Dyer, who has a grandchild at 43. I’ll be calling him for tips. We could do grandaddy day care together.”

Dean added: “I’m hoping people will see me pushing a pram in the street and go, ‘Oh, is that your child?’

“Because although I’ve got grey hair, I don’t think I look like a grandad just yet.”

Dean was just 18 and at the height of his EastEnders fame when he had Chloe and her twin sister Charlotte with his ex-partner, Sarah Burge.

Before Mimi’s arrival, he admitted that his newfound fame at the time didn’t put him in “the right headspace” to become a father.

Dean said: “I had my girls when I was on the biggest show in the country, being watched by 20million a night.

“Maybe I wasn’t in the best headspace to have kids. People were falling at my feet, I was going out a lot and then I was a dad to twins.

“There is a perception of Dean Gaffney. I’m sure the average man still thinks I fall in and out of clubs every night. But it couldn’t be further from the truth. I like going out just as much as the next person. I’m a social butterfly.

“But I’m not a big drinker or into drug abuse. I’ve never taken a drug in my life. I’m very anti-smoking and anti-drugs.

“I’m sure people think I was not a present father but the truth is I woke up in the same house as my daughters until they were 19 years old — until their mum and I split.”

Dean added: “We had our ups and downs like most couples but for the most part I was a very hands-on dad. I’ll be the same as a grandad.” Dean is best known for playing Robbie Jackson in EastEnders His daughter Chloe and her partner Declan welcomed Mimi in July

The Queen wrote a furious note to one of her top chefs after she...

Dragons’ Den-style challenge to destroy billions of pounds worth of unusable Covid PPE is...