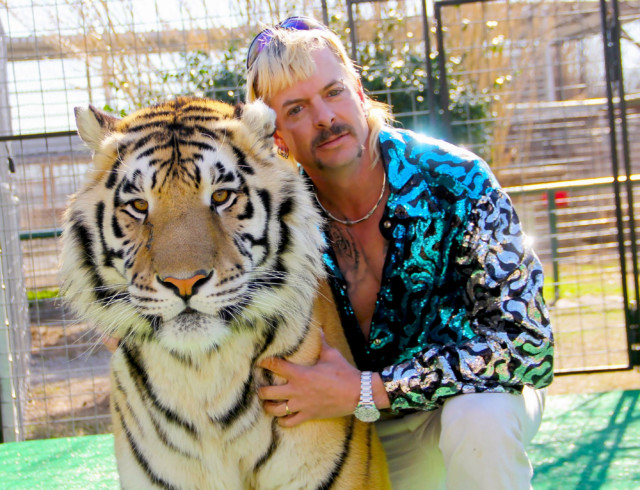 IT seems so long ago that Netflix’s smash-hit series Tiger King was on our screens.

But UK fans of the wacky show about Joe Exotic will soon get to see some home-grown versions of the oddball US big cat keeper.

I’m told ITV and telly hardman Ross Kemp, who played EastEnders’ Grant Mitchell, are working on a documentary investigating the owners of lions and tigers in the UK — and exploring their unusual, controversial and often touching relationships with the unlikely pets.

A source said: “Ross loves getting under the skin of gritty topics and interviewees. And given how big Tiger King was last year, this seems a good idea.

“No one has really delved into the lives of British Joe Exotics and what possesses them to keep these creatures in the way they do.

“There are numerous examples of Brits having all sorts of animals, and this doc will look at some of the characters involved.”

Production of the 60- minute series, currently referred to as Ross Kemp Meets Britain’s Tiger Kings, started at the end of 2020 and is expected to be shown this year.

Ross has already spoken to controversial big cat owner Reece Oliver, who keeps two rescued African lions and a puma in his garden in the Nottinghamshire village of Strelley.

The former showjumper was at the centre of controversy last summer when a teenage stable girl was mauled while looking after one of his 5ft lions in its pen.

I’ll stick to my pet dog, thanks.

The hunt to find a mini Carr

Comedian Alan Carr has landed a sitcom based on his life story.

And the search is already on for a Chatty Lad to play him during his youth. But TV bosses have warned aspiring Alans not to dress up in “funny glasses and false teeth” or do an impression of the Chatty Man and Interior Design Masters star in their bid to be cast.

The series will document his upbringing in Northampton during the Eighties.

Bosses told applicants: “Just try to copy Alan. Show us a bit of your personality and bring the character to life your own way.”

Pint-sized thespians are being shunned, with the casting agents looking for some “naturally funny, characteristic and confident” everyday kids, aged between ten and 13. The series will document his upbringing in Northampton during the Eighties

The show, which comes from the producers of Gavin & Stacey and The Mighty Boosh, will document Alan’s foray into the “masculine world of lower- league football” driven by his father Graham, who was the manager of Northampton Town FC.

I can only imagine the Carr crash moments that viewers are in for.

She could not have looked happier while out on a stroll with the model and marketing manager as they walked pup Carter yesterday. The couple were pictured celebrating their first Valentine’s Day Ferne could not have looked happier while out on the stroll Ferne recently moved in with Jack

The loved-up pair are thought to have known each other for years. But they embarked on a relationship last year and recently moved in together.

Another day in lockdown, another TV quiz. This time it is Channel 4 announcing a “list-based quiz format” called The Answer Trap, hosted by Anita Rani.

The new 30-part daytime series will involve two teams playing against each other to secure as much prize money as they can. Anita asks teams to place answers from a series of lists into their relevant categories.

However, not all the answers belong in the categories – some are devilish decoys.

Did you miss our previous article…
https://www.hellofaread.com/soap-opera/coronation-street-spoilers-simon-barlow-leaves-brother-sam-with-drugs-after-being-forced-to-kidnap-a-teenager/