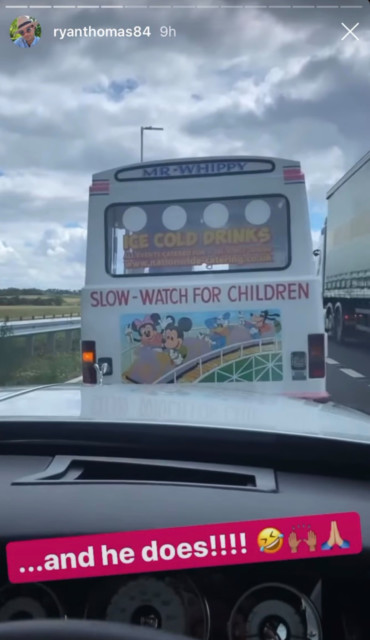 EX-Coronation Street star Ryan Thomas stopped an ice cream van on a dual carriageway to treat himself to a Mr Whippy. He appeared to film the moving vehicle on his phone, uploading pictures and videos to Instagram as he drove.

Ryan got the driver to pull in on double yellow lines to serve him.

The driver is seen making Ryan a cone with lots of toppings before the ex-soap star tucks in. Dad-of-two Ryan has since deleted the videos. He escaped a ban in 2010 despite leaving an accident scene after crashing.

Using a hand-held phone while driving can bring a £200 fine and six penalty points.

Parking on double yellow lines can incur a £70 fine. Ryan has since deleted the videos

Did you miss our previous article…
https://www.hellofaread.com/soap-opera/emmerdales-harriet-will-get-will-murdered-by-malone-say-convinced-fans/

All 42 games announced for Xbox at Tokyo Game Show

I’m A Celebrity fans stunned as Beverley Callard and Victoria Derbyshire are eliminated in...