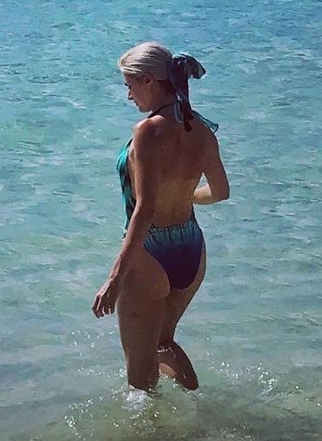 SARAH Jayne Dunn flashed her bum as she raked in £500,000 on OnlyFans – a week after being axed from Hollyoaks

The 40-year-old beauty gave her followers a glimpse of her stunning figure in a swimming costume.

She posted the throwback snap and revealed she had booked a sunshine break with her husband Jonathan Smith.

She said: “We’ve just booked our first family holiday abroad in over 2 years and I cannot wait to feel the sun on my back, the sand on my toes and the sea on my legs

And to spend some quality time with my little family

Sarah was axed from Hollyoaks over selling racy images on OnlyFans, saying it was “not a decision that I made” to leave Hollyoaks as a result.

Hollyoaks said cast members are not allowed “to be active on certain 18+ websites” and confirmed Dunn is departing the soap.

Dunn told ITV’s Good Morning Britain: “The idea was to launch OnlyFans and take back some power and control over my images, what I create, where I put them, and put them onto the platform. And I’ve been thinking long and hard about this for a good few months, with lots of different options.”

She added: “I was going to run that alongside my job as well, and it’s not a decision that I made.

“But this is where we’re at and I’m looking at the future and where I’m at, and I’m really enjoying being in control of everything and it’s really empowering.”

Asked whether Hollyoaks producers would feel comfortable with the content, given the young fans of the soap, Dunn said: “The site itself, you have to be over 18 to access.

“But my specific content was no different to the content that I’ve put on Instagram, that I’ve done for men’s magazines, for calendars, all of my career.

“So actually, by putting it onto a platform where you have to be over 18 to get on there, it’s actually protecting it from the younger audience.

“It’s taking it out of the public view, and it’s putting it behind a paywall where you have to be of a certain age to view it.”

OnlyFans was founded in 2016 by British entrepreneur Tim Stokely and its official website says the platform has “1,500,000+ content creators” and it has paid out at least £3.7 billion “annually to creators”.

Earlier this year, it announced plans to ban sexually explicit photographs and videos on its platform but backtracked after a backlash from users. Sarah was accused of glorifying prostitution on OnlyFans

McDonald’s has 30% off EVERYTHING on its menu today

Downing Street plans for Boris Johnson to be absent for several weeks as he...

Keir Starmer vows to ‘sweat blood’ to win back voters – but they don’t...