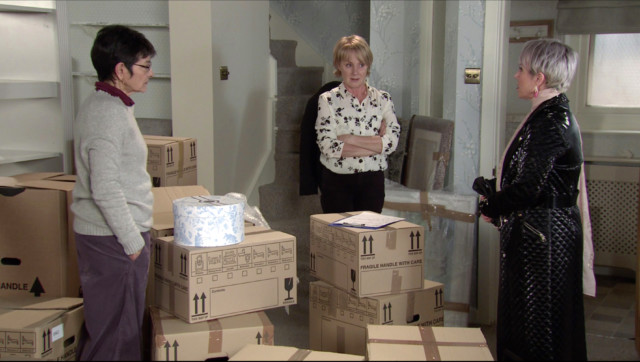 DYING Peter Barlow begs Carla Connor for another chance next week in Coronation Street after she packs her bags.

Peter is dying from liver failure and has refused all potential methods to save his life, but will he turn things around for Carla? Here’s the lowdown from the cobbles…

Debbie claims she was in the dark about Ray’s antics as news of his disappearance and the Chairperson of the planning committee’s arrest spreads through the cobbles.

Debbie breaks the news to Sally and David that the planning committee have revoked Ray’s application – and that all their houses are safe.

But where are Abi and Ray?

when the police trace the emergency call about Abi back to Debbie’s phone.

Debbie tells the police she found Abi unconscious on the bistro floor and assumed she’d overdosed so called an ambulance. Ken tries circulating a photo of Peter to all local pubs and shops and begging them not to serve him, but he despairs when his son still manages to return home drunk.

Meanwhile, Adam brings together Ken and Tracy and suggests they take turns looking out for Peter.

Peter takes a turn for the worse later in the week and starts penning a suicide note to Simon.

When Carla is horrified, Peter insists it’s a farewell letter to help Simon come to terms with the fact he’s dying.

But when Peter reads out the letter to Simon, the teenager is horrified and washes his hands of his dad. Debbie tells David that she’ll sell his house back to him for the original price, but David later admits to Shona that he no longer has the money.

When Tracy overhears that David has money woes, she corners Debbie and reveals she’d be interested in buying his house.

Debbie assures David he gets first refusal but admits that she wants a quick sale, leaving David fearing the worst.

Will David get the money together? Asha and Nina grow closer next week in Corrie

When Dev tells Nina that Asha is falling behind on schoolwork as a result of the situation with Corey, Nina suggests that she studies in the cafe.

Corrie has teased that viewers will later see a spark between the pair as Asha helps Nina out in the cafe.

Could a surprising romance be on the cards? Gail and Eileen lock horns over George next week in Corrie

6. Gail and Eileen reignite their feud

Gail and George are delighted to discover they share a set of grandparents called Fanny and Augustus Page.

But when Mary and Eileen spot Gail cosying up with George, who’s been flirting with them in recent weeks, a furious showdown erupts between the three women.

George wonders what on earth he’s got himself into. 7. Dying Peter has a final plea for Carla

Things only get worse later in the week as Ken finds Peter suffering a seizure and calls an ambulance.

In the hospital, the Barlows discuss the doctor’s advice to gradually reduce Peter’s alcohol intake slowly to stop him dying from sudden withdrawal.

Meanwhile, Carla gets an offer she can’t refuse from her new client Lucas, who she realises is an old flame she met when she used to live in Devon.

Tempted to turn her back on Peter for good, Carla is swayed by Lucas’s offer of a weekend away.

But she’s shocked when Peter begs her not to stay.

The Big Night In was short on laughs but luckily it only lasted three...

PS5 stock HOPE as new ballot gives you a chance to get console before...