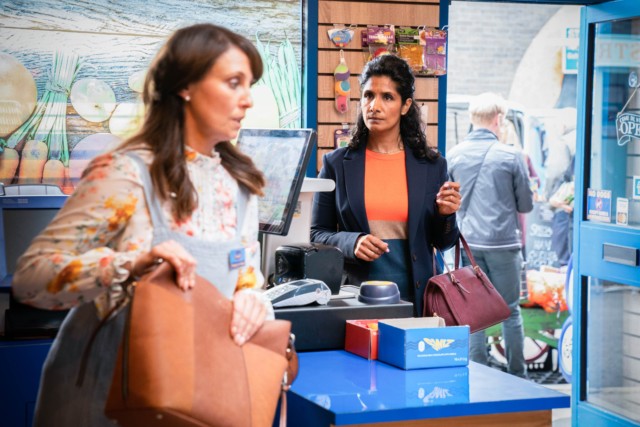 SUKI Panesar reacts violently when Honey Mitchell exposes the truth about their kiss next week in EastEnders.

Honey continues to despair about her enforced evening shifts at the Minute Mart and begs Suki for time off.

When Suki refuses to cut Honey any slack, she reaches the end of her tether and accuses Suki of acting out following her rejection.

When Honey tells Jay and Billy that she can’t go to Miami with Janet, Jay grows suspicious.

Later in the week, Honey finally admits to Jay that Suki tried to kiss her – and that she rejected her.

When Jay challenges Kheerat over his mother Suki’s behaviour and accuses her of workplace bullying, Kheerat sees red and attacks Jay.

Later, Kheerat tells Suki about Honey’s accusations but will she deny them?

Kheerat confronts Honey for lying and orders her to admit she made everything up.

Later, Suki pays Honey a visit and, despite Honey assuring her that she has nothing to be ashamed of, Suki slaps her before threatening to destroy her.

However, Honey makes clear that she holds all the power, telling Suki she’ll tell everyone about her part in Jags’ death.

How will Suki react?

Tiffany is fuming when she discovers that Keegan has frozen their joint bank account next week in EastEnders.

Later, she gets her revenge when she threatens to take half of Keegan’s market stall.

Keegan resolves to leave Walford and tells Bernie and Karen that he’s spoken to his brother Keanu, who has agreed to let him stay with him for a while.

Bernie asks Keegan if leaving is really the best idea when Tiffany needs him, but will he change his mind?

Viewers will of course know that Dotty has persuaded her uncle Rocky to pose as Sonia Fowler’s father in order to con her out of Dot Cotton’s inheritance money.

Sonia recently agreed to invest in her father’s business, playing into Dotty’s plan.

But next week, the arrival of Dotty’s mother Sandy will threaten everything.

Rocky reassures her he has a plan to get money and asks Vinny to DJ at Dotty’s relaunch event, but he turns his offer down.

When Sonia chases up Dotty for bill payment, Vinny takes pity and helps out after all but makes clear that she is still in his bad books.

Rocky scores VIP invites for himself and Sonia to attend Dotty’s noughties event at the club.

However, disaster strikes when Rocky catches sight of a drunk woman and it’s not long before she’s revealed to be Dotty’s mother, Sandy.

Later in the week, Dotty invites Sandy for a chat, but Rocky insists it’ll blow their cover.

Will Sandy expose their scheme?

Later in the week, Honey tells Billy that she is going to Miami with Janet.

However, after another shock development with Suki, Jay suggests calling the Minute Mart head office to get even with the evil shop owner.

Viewers know that Martin has been struggling following Ruby’s arrest and subsequent sale of their house.

Next week, Nancy suggests asking Peter for his stall back, but Peter insists it’s the chippy or nothing.

Later, Martin vents to Nancy when Peter orders him to do another shift and ruins his plans with Hope.

Sharon assures Martin he’s doing what he needs to do to support his family.

Later in the chippy, Zack swipes Peter’s tablet while Martin is looking the other way.

Peter is furious to find that his tablet has been battered and accuses Zack and Martin.

Has Martin just made things a whole lot worse?

Bobby Beale proceeds to bump into Martin at the Minute Mart and, after noticing that his card has been declined, he hatches a scheme. Suki slaps Honey and threatens her

Can I get a refund if I own a caravan and can’t afford the...