LEANNE Battersby will get a nasty surprise in the cobbles this week as Harvey Gaskell may be ready for revenge again.

The drug lord lets her know he’s still on to her with a chilling letter. Get the lowdown on all the upcoming Coronation Street drama.

But what does he really have in store for her?

Strictly star Will Mellor was teased to be coming back, reprising his role as the ruthless criminal in the ITV drama.

Harvey hasn’t been seen in Weatherfield since October, 2021.

Less than a year later, he may already have a new plan to wreak havoc again – and get revenge on Leanne Battersby (portrayed by Jane Danson).

Coming up, the Bistro co-owner is shocked to received the same letter as her partner, Nick Tilsley (Ben Price).

The pair soon come to realise the letters are actually prison invitations from none other than Harvey Gaskell himself.

But instead of going along with whatever the criminal has planned for them, both Leanne and Nick agree they’re better off ignoring him.

Leanne and Nick rip their letters, thinking nothing of it – until the former realises how rattled Harvey reaching out has left her.

In later scenes of the soap, Leanne admits she won’t be able to rest until she finds out what Harvey wants from them.

Will she get back in touch with Harvey?

What does Harvey want? 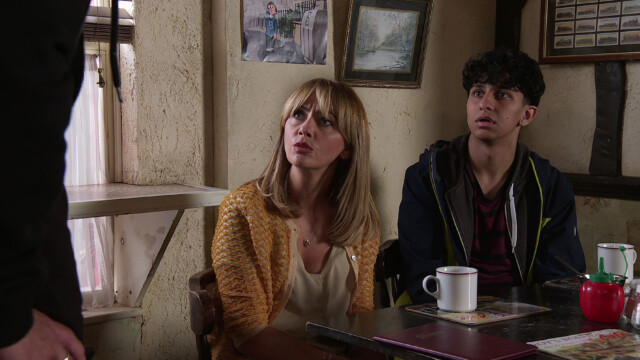 Maria Connor has been harassed in the past – but who’s the culprit?

Meanwhile, Maria Connor (Samia Longchambon) may have thought she was finally spared from any online abuse but some nasty messages will be bringing back some horrific memories.

But an online troll isn’t happy with Maria’s activism and resorts to lashing out through disparaging comments, sparking new death threats for her.

The hairdresser soon turns to David Platt (Jack P. Shepherd) and his wife Shona (Julia Goulding) about the messages.

To make matters worse, the posts give away her place of work.

His suspicions only grow when Max refuses to let him use his laptop.

When Maria reveals that her home address hasn’t been posted, David tells Shona that he believes Max may be responsible for the posts as revenge on Daryan for taking up the last place at Weatherfield High.

This left Max without a school, as he was determined to leave the Pupil Referral Unit, where he was being bullied.

Shona urges David to approach Max with his suspicions to finally make sense out of them.

But when David follows her advice, Max denies having anything to do with the threatening comments Maria received.

David is still doubtful of Max and, soon enough, the police are involved while their relationship becomes more and more strained.

The pair continue to row with Max berating David for not trusting him – until the authorities announced they’re on their way to No.8 to speak with them all further.

Do the police have something against Max? 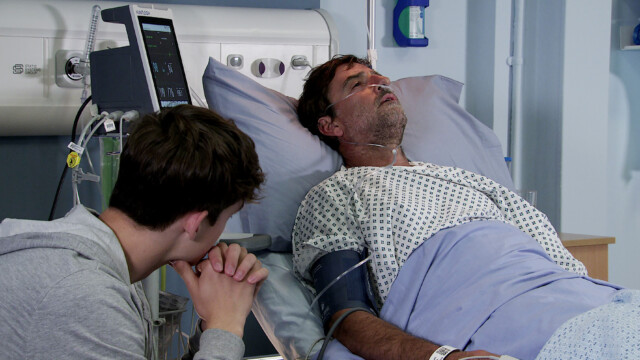 3. Aaron’s father fights for his life

Elsewhere in the cobbles, Aaron Sandford (James Craven) is still trying to dodge his father’s abuse.

But this will be more complicated than anticipated, particularly when Eric Sandford (Craig Cheetham) gets stuck in a house fire which leaves him fighting for his life.

Coming up, Aaron is bombarded with texts from his angry dad, prompting his girlfriend Summer Spellman (Harriet Bibby) to beg him not to go home out of worry.

Instead, Billy Mayhew and Todd Grimshaw agree to check up on Eric and they simply report back that he was drunk and angry.

Later on, however, the police show up at the flat and Aaron is stunned when the officer tells him his father is actually in hospital after a house fire.

Eric comes to when Aaron pays him a visit in later scenes – before groggily wishing that he hadn’t survived. 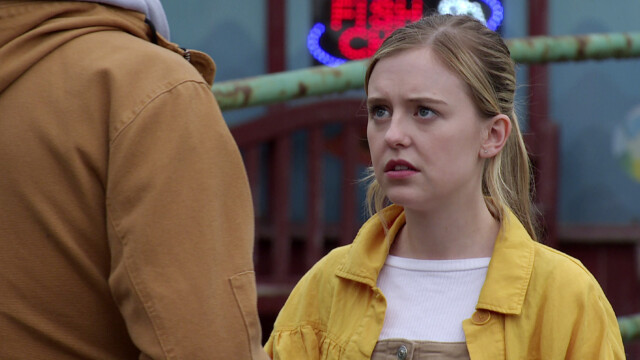 Aaron decides to focus more on his relationship with his father

4. Summer gets shut out

This prompts Aaron to think about his priorities, heartbroken and blaming himself for leaving his father unsupervised and with no way of contacting him.

Aaron shuts Summer out, while she begs him to share his burden with her.

The youngster is adamant that he has to focus on taking care of his father instead of on their relationship and Summer is crushed.

Meanwhile, Billy is found entertaining a couple named Mike and Esther in the flat.

Knowing about her issues with Aaron, the archdeacon believes it would be good for her to stay busy.

When Mike and Esther explain they are running a charity clothes swap event, Billy thus volunteers Summer to help.

Could this be the end for Summer and Aaron’s relationship?

Will Eric get his act together? 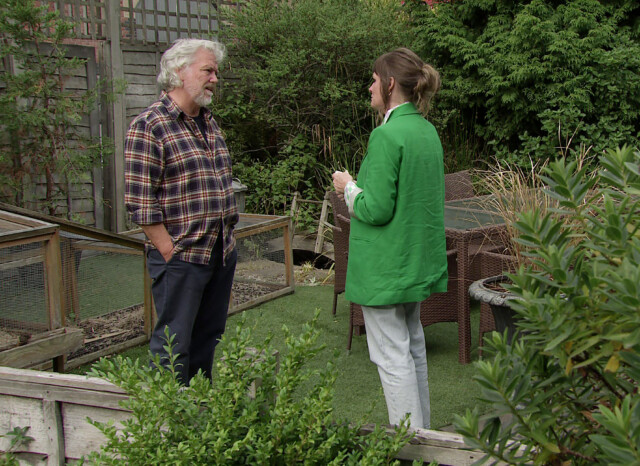 Will Stu Carpenter find out exactly what happened to Charlie?

Stu Carpenter (Bill Fellows) is slowly bonding with his daughter Bridget and granddaughter Eliza – while Alya Nazir has been fighting his corner to prove he never murdered anybody.

Thankfully for Stu, he won’t have to wait much longer for the truth about Charlie’s death – for which he was wrongfully incarcerated after being pushed to a confession – to finally be exposed.

This week, Bridget meets Yasmeen Nazir (played by Shelley King) in the Rovers.

The Speed Daal owner guesses that Bridget and Eliza want to continue seeing Stu but Lucy, his former wife, is against it.

Yasmeen takes a huge initiative to help her love interest get closer to his family and later announces to Alya and Stu that Bridget and Eliza will be visiting them the following day.

There’s only one detail for them to all keep in mind – Lucy mustn’t be told about the visit.

In later scenes, Stu is thrilled to see Bridget, Eliza and Yasmeen for brunch but when the young girl asks her grandfather about life in prison, it becomes too much for Bridget who runs out to the garden.

Stu follows her to comfort her, admitting how angry he was at being in jail for something he didn’t do.

However, Bridget drops a bombshell on him and he’s shocked by what she reveals.

Meanwhile, Dee-Dee Bailey leaves Alya a voice message, explaining that the DNA results are due tomorrow.

Later on, Stu is feeling lighter for knowing the truth… but it’s a struggle for Yasmeen.

Dee-Dee then calls into Speed Daal to inform Alya the results are in.

And there’s another shock looming for Alya. 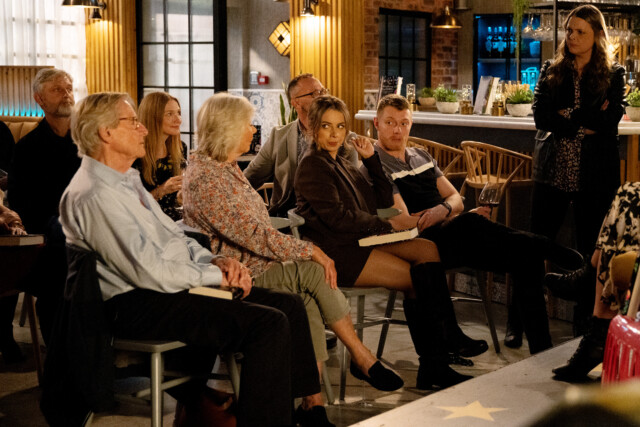 Tracy is not happy to see Ken with Wendy

Ken Barlow (William Roache) and Wendy Crozier (Roberta Kerr) have been building bridges, ready to forget the past and move on.

However, Tracy Barlow (Kate Ford) isn’t one to forgive and forget and makes it known that she doesn’t like seeing her stepfather with his former mistress.

In previous episodes, the florist even tried to intimidate the social worker.

This week, Tracy takes it to another level – with a little help from her late mother Deirdre.

In the café, Wendy gives Ken tickets to a book launch at the Bistro for his birthday.

Later on, Ken and Mary Taylor discuss her ideas for the play but he abruptly leaves after receiving a text from Wendy.

While in the Rovers, Mary tells Brian Packham and Tracy that Ken ditched her and even lied to her face.

Meanwhile, at the book launch, Daniel Osbourne and his girlfriend Daisy Midgeley tell Ken they are pleased to see him with Wendy.

But things take a turn when Tracy storms in and makes her feelings very clear.

Surprisingly, Tracy later apologises to Ken for making a scene on his birthday and offers to cook lunch for Wendy to welcome her into the family.

Wendy arrives at No.1, grateful to see Tracy extend an olive branch.

However, this turns out to be another trick.

How will Wendy react? 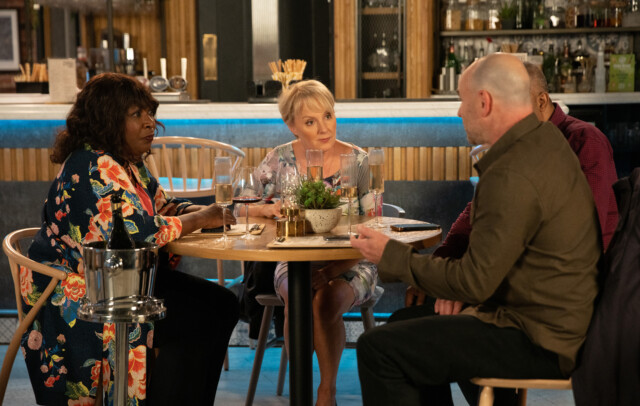 Corrie viewers have speculated that Tim Metcalfe (Joe Duttine) and Aggie Bailey (Lorna Laidlaw) have been intimate or are even having an affair.

Their proximity is set to come to light to Sally (Sally Dynevor) in upcoming scenes of the program.

It all begins when Tim and Sally’s sex life gets back on track after they become intimate for the first time in several months.

Later on, the couple head over to the Bistro – where they spot Aggie alongside her husband Ed Bailey (Trevor Michael Georges) who asks them to share their table.

The nurse feels awkward when she sees Sally admiring her necklace, unaware that Tim gave it to her as a gift.

Later on, Tim sees Aggie is confused by his flirtatious behaviour with Sally and sends her a text.

But he’s horrified when he realises he actually sent Sally the message.

What will be Sally’s reaction?

Curtis Pritchard got Maura roses and wine from TESCO before split as he blames...