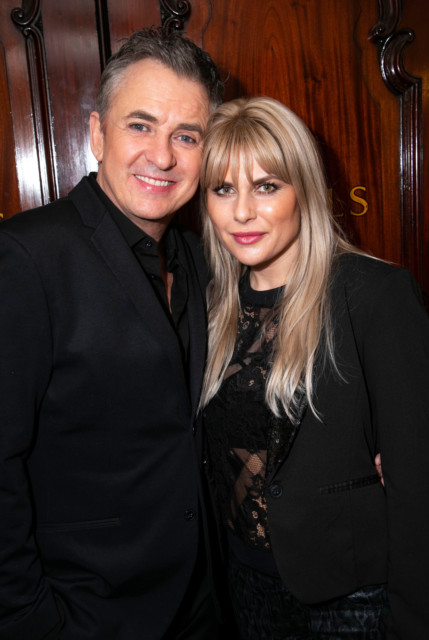 SHANE Richie has revealed he’s planning to adopt another child after leaving the I’m A Celebrity… Get Me Out Of Here castle.

The former EastEnders favourite previously poked fun at his expanding brood during a recent Bushtucker Trial – and now it appears Shane is looking to add another.

The actor, 56, is hoping to adopt a child with his wife Christie Goddard following his departure from the ITV reality series.

According to Shane, the pair have been toying with the idea for some time.

He said: “We always talk about it, myself and Christie, and because she is fifteen years younger than me and she is only 41, so there is still time.

“We have been talking about having another baby and there is still time and she is always talking about wanting another kid (her own biological kid) and I know our daughters would love another brother or sister. “But now we are talking about adopting and because we live in Surrey, the rules there are very different to when we lived in Bucks, which was a long time ago, but I am still up for it.”

The TV star added: “The only thing is that you’ve got to put time aside to sit down and I’m not sure if I am eligible now because of my age and because of what I do for a living. But it’s only because I am an actor and because I am not always around.

“I don’t have a 9-5 job and I don’t know if it would be fair. But I don’t know we still talk about it and if Christie wants to go ahead with it and it’s a decision that she wants to make then that is fine.” Christie and Shane first met in 2001 The I’m A Celeb star went on: “One day if I can be home long enough. We might even foster but the only thing that does hold us back is my occupation and not being around. I just don’t think it would be fair on Christie having another child.

“If I landed a gig in the West End where I was going to be home for a year then that might help but at the moment I am tour and I am away filming and it wouldn’t be fair.

“But listen my kids will say something different and they would quite happily adopt or have another baby tomorrow and have another child in the house. Oh yeah they love kids.”

Shane has made no secret of his love for his kids on the ITV show. The family have always been open to adopting a child Earlier on in the series, Christie revealed he has a secret sign to tell his children he loves them.

Back in 2017, the star opened up on his plans of adopting a fourth child with Christie.

Shane, 53, said at the time: “We’re talking about adopting. We may go down the foster route, which means we can get any age. Because my children are six, nine and 11 we might get a baby.”

He added: “Although we could have more children I think it’s because we can have children that we think ‘why don’t we?’”

The two appeared to disagree over the washing-up earlier this week.

But now the feuding pair will be forced to work together as they face the trial together tonight.

How Kate Garraways husband snubbed her as bimbo but now says theyre having their...

Ant and Dec get drenched in Wales in latest hilarious trailer for I’m A...