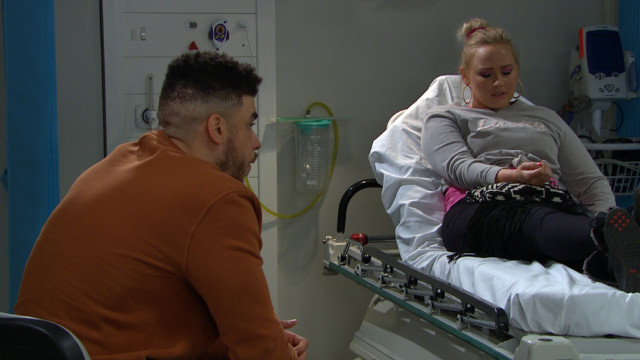 HARRIET Finch is shocked out of her skin next week in Emmerdale when DI Malone declares his love for her.

1. Tracy gets a shock

Next week’s episodes of Emmerdale will see Nate and Tracy get a huge shock when they head to the hospital to get Tracy’s wrist treated.

After undergoing a urine test, the pair are stunned to learn Tracy is pregnant.

Fans know that Tracy has hardly been lucky in love – and that she was embroiled in a dramatic storyline when she aborted David Metcalfe’s baby as revenge for him cheating on her with Maya.

Is Tracy ready to trust Nate and have his baby? Viewers know that vicar Harriet has been hiding Malone in the church in the wake of Will’s brutal attack.

Next week’s episodes of the soap will see Malone accuse Harriet of always coming back to him over Will.

When Harriet denies his accusation, Malone reveals the extent of his feelings for her.

The vicar is left stunned by his declaration of love.

The burning question is: will she decide to leave Will for Malone? Emmerdale’s Dan lashes out at his daughter Amelia

Emmerdale fans know that Dan has remained adamant that he doesn’t need any help in the wake of his paralysis, lashing out at anyone who’s tried to assist him.

Next week viewers will see Dan grit his teeth through the pain as he tries to stand up.

Later, Bob suggests he uses part of the compensation money to hire a private physio to speed up his recovery.

But when Amelia also chimes in and encourages Dan to go ahead with the sessions, Dan reaches breaking point and snaps at her.

Will Dan stop pushing his daughter away before it’s too late? Luke suggests to Victoria that he cancel his date with Amy.

But Victoria hides her true feelings and encourages him to go on the date.

Will Victoria tell Luke how she really feels before it’s too late? Andrea notices something odd about Jamie next week in Emmerdale

Andrea starts to notice a few odd things about Jamie’s demeanour next week.

Will she realise he’s secretly plotting revenge against her?

If so, will Andrea play Jamie at his own game?

6. Gabby gets some bad news

Gabby is devastated to discover that her mum Bernice is selling the salon.

And the teen receives another blow later in the week when she’s told that Bernice is staying in Australia indefinitely.

Nicola is quick to notice that Gabby is looking a little peaky – but will she be able to cheer her up?