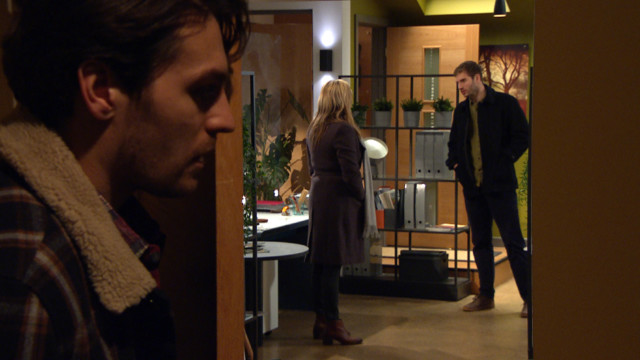 Jamie will target Butlers after he falls into Mack’s trap. Here’s the lowdown from the Dales…

Viewers will see Mack grow delighted when he overhears Kim and Jamie discussing a potential client.

It’s not long before Jamie falls into Mack’s trap when he meets an imposter client rather than the real one.

Mack watches their meeting from across the restaurant and is delighted when Jamie offers to show the fake client the accounts.

Later, Jamie and Kim are horrified to realise they’ve been hoodwinked and Jamie heads out for revenge.

While Mack and Moira celebrate victory, Jamie sloshes what he thinks is petrol around the farm.

But Mack points out its water and humiliates Jamie, sending him on his way.

But it’s not long before Jamie finds a real petrol canister and sets off to Butlers on foot with it. As Jamie starts covering the barn in petrol, he’s unaware that young Kyle is playing hide and seek there.

Will Mack realise before it’s too late?

Either way, Moira is furious and viewers will later see her enter Home Farm with a gun.

In a shock move, she turns and pulls the trigger.

Who has she shot? Viewers will see Laurel tempted by a bottle of vodka in the cupboard as she continues to battle her demons.

She’s on the verge of pouring it down the sink when an alert from a pregnancy app on her phone touches a nerve – and pushes her to knock the vodka back.

Nicola bursts in and is shocked to see what she’s doing, leading Laurel to explain about the termination.

Nicola calls Jai, but will he be able to help Laurel? Jimmy is stunned by Juliette’s revelation

Viewers will see Jimmy on edge next week after Juliette turns up out of the blue as he worries she’ll return – and demand to see Carl.

Nicola suggests tackling the problem on the head and organising a meeting.

Jimmy agrees but as they meet up with Juliette, they’re stunned by her shock revelation.

Will Jimmy and Nicola ban Juliette from seeing Carl? Al quizzes Priya about the missing money next week in Emmerdale

Priya softens towards Al next week when he quizzes her about the missing money.

Will her and Debbie’s revenge have all been for nothing?

Or will she realise Al is only interested in the money – and not her?

Paul is intrigued when Mandy and Vinny discuss the fact that Liv owns her house.

Later, Paul is cornered by Connor who demands £4,000 by the end of the week.

Will Paul threaten Liv and demand the money from her?

Megan Barton-Hanson reveals she wants to ‘couple up’ with Maura Higgins and slams people...

Love Islands Mike WILL bag Jess but then dump her in Casa Amor insist...

I’m A Celebrity viewers are all saying the same thing as Danny Miller reveals...