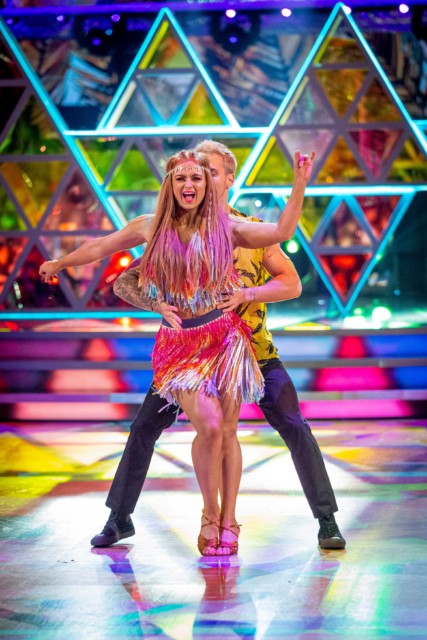 STRICTLY Come Dancing’s Maisie Smith almost fell during a backflipping salsa – just a week after landing in the bottom two.

The EastEnders star, 19, was the series favourite to win until her shock bottom place last weekend.

Maisie and Gorka nearly pulled it off without a hitch

Maisie had everything to prove with her Salsa alongside dance partner Gorka Marquez – and she almost pulled it off without a hitch.

During one of the complicated dance moves, Maisie performed a backflip, but stumbled right at the end.

The stumble didn’t escape the judge’s attention – but they placed the blame with Gorka instead.

Craig Revel Horwood said: “It was a bit unfortunate about the bad landing but I’m blaming your partner.” Maisie was in the bottom two last week

Gorka admitted it was his mistake on the dance floor too.

Luckily, it didn’t affect her score too badly as she managed to get nines from Shirley Ballas, Anton Du Beke and Craig.

This was her highest score of the series so far.

Maisie was forced to compete against Max George and Dianne Buswell in the dance off last week.

Maisie and Gorka finishing the dance

The judges ultimately decided to send Max home – but viewers at home were furious that she’d been vulnerable in the first place.

Taking to Twitter, one fan wrote: “Can’t believe Maisie is in the bottom two!”

Another agreed: “I’m not Maisie’s biggest fan personally but no way do her and Gorka deserve to be in the dance off!”

A third said: “Shocked @maisie_smith_ is in the dance off”

The judges were accused of undermarking the EastEnders star after three of her competitors got their first 10s of the series.

Shirley Ballas shocked when she awarded HRVY with full marks, which she went on to dish out to Clara Amfo and Bill Bailey.

Did you miss our previous article…
https://www.hellofaread.com/soap-opera/im-a-celebs-ruthie-henshall-shattered-royal-protocol-by-shaking-queens-hand-after-sex-with-prince-edward/

Queen is ‘sad not angry’ about Harry and Meghan bombshell Oprah interview – and...

I love Monster Munch in bed… but I’m not putting that on Tinder, says...