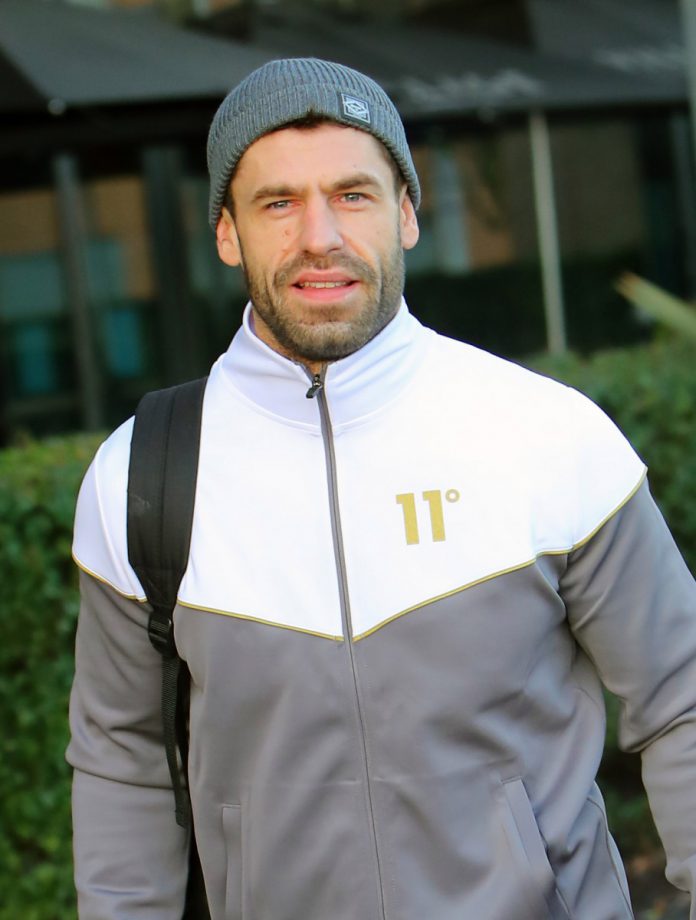 STRICTLY’s Kelvin Fletcher and Oti Mabuse were spotted leaving a hotel together after he missed his wedding anniversary yesterday.

The ex-Emmerdale star said he was “gutted” he couldn’t spend Thursday with his missus Liz Marsland, before staying the night in London to attend dance rehearsals today.

Kelvin Fletcher, 35, was gutted to miss his fourth wedding anniversary on Thursday

Kelvin, 35, looked refreshed as he strolled out of the hotel in the November sunshine, wearing a tracksuit and beanie hat.

His Strictly dance partner and coach Oti, 29, wrapped up warm in a metallic puffer jacket and had her game face on as they headed to the studio.

The pair have one more day to get their steps in order, before they compete in the quarter finals of the BBC One dance competition tomorrow.

However, Kelvin admitted he’s missed spending time with his family, including baby daughter Marnie, when he appeared on This Morning on Thursday.

Speaking on This Morning, the Oldham-born star told ITV hosts Holly Willoughby and Phillip Schofield: “I think that’s been the hardest thing to accept really is being away from home.

“Today is my wedding anniversary and I’m not at home. It’s gutting really I’ve got a young family. Not only that it’s friends, I missed a friend’s wedding recently.

“But I’ve loved it and it’s been an amazing experience, and I don’t want to go.”

Kelvin also took to Instagram and paid tribute to his beautiful wife.

He shared a gallery of photos from their wedding day and wrote: “28th November 2015 Happy 4 Years Wedding Anniversary darling Youre the love of my life @eliza_marsland #creatingmemories”

The couple tied the knot in November 2015 and share daughter Marnie Molly together.

Speaking about their musical themed wedding day, which included having their first dance to The Carpenters Weve Only Just Begun with Hello! magazine, she gushed: “It wasnt until we listened to it recently that we realised how significant the words were.

“And that even though we have been together for years, this is the beginning of a whole new level to our relationship.”

Kelvin admitted: I was really worried that after the birth, Liz wouldnt want any more kids but a couple of days after Marnie was born, Liz told me she couldnt wait to have another baby!

Princess Dianas death could have broken Prince William but instead, it made him strong...