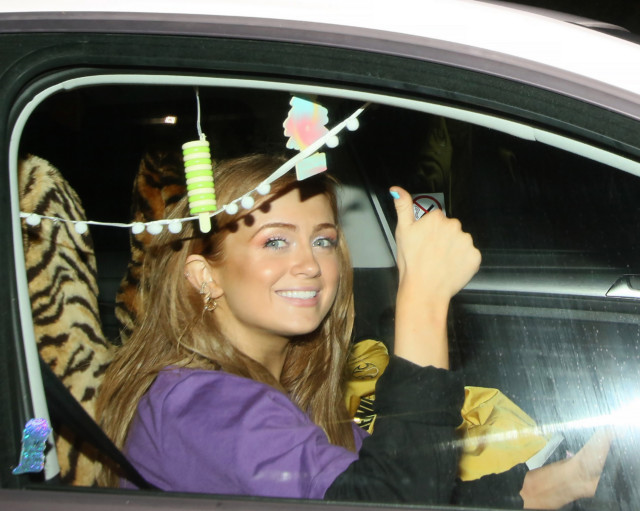 STRICTLY’s Maisie Smith was all smiles after a successful day of rehearsals with dance partner Gorka Marquez.

The talented EastEnders‘ actress gave onlookers a thumbs up as she headed home in her car after a week of learning the Tango. Maisie, 19, couldn’t stop grinning at the wheel of her motor that she decked out in animal print car seat covers and fluffy dice.

The star was glowing as she drove off – clearly confident that she’d nailed her second dance.

Maisie has been busy preparing for another Strictly performance after coming runner up on the leaderboard behind pop star HRVY last week.

She scored an impressive total of 24 for her week one dance with professional dancer Gorka, 30. Maisie was glowing after a day of gruelling practice Gorka updated fans on their training today alongside a photo of the pair.

He said: “Last day of rehearsals for the Tango before tomorrow first camera block. Excited to show you guys this week routine and how hard @maisiesmithofficial is been working!

And last week viewers couldn’t keep their eyes off Maisie’s bottom throughout her Samba last weekend. But Maisie faces a distraction from dance after she and fellow hopeful HRVY shared a string of flirty messages online.

It’s believed the soap actress is already being watched over by Strictly execs who want to ensure stars keep to social distancing.

A source told HOAR: “Maisie and Hrvy are being monitored by the producers after it’s become clear their connection could easily lead into a Strictly romance.

“They have both been told, as have the rest of the cast, that kissing is off limits. Usually the Strictly cast are very tactile. Not in 2020. The cast have secretly named bosses the ‘passion patrol’.”

Struggling credit card borrowers to be offered lower payments and £500 interest-free overdrafts to...