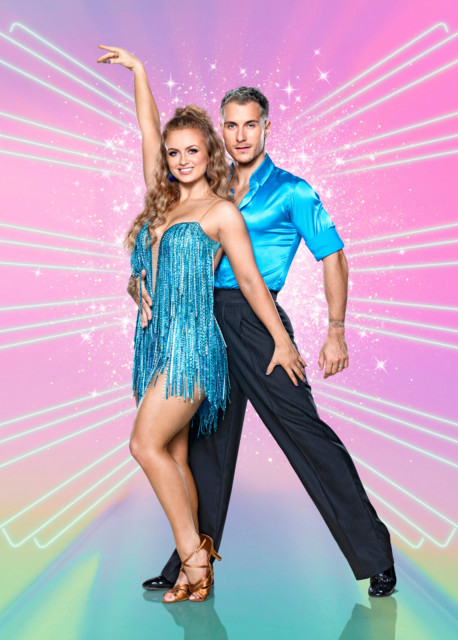 But Shirley, 60, says Maisie has a long way to go to get her hands on the trophy, while an outsider like Bill Bailey, 55, should not be underestimated.

She said: “I know she won the special but if I was Maisie I wouldn’t take anything for granted because doing one dance is not like doing ten weeks.

“You could see the competitive spirit, you could feel it. These people all look like they were at the starting block, ready to move forward.”

Maisie has been given odds as short as 2/1 to win with partner Gorka Marquez.

But Shirley says comedian Bill, who is dancing with reigning champion Oti Mabuse, may not be the expected novelty act like ex- politician Ed Balls two years ago.

She added: “I turned to Craig and said, ‘He’s going to be our Ed Balls and the series is going to be a lot of fun’ and then he danced.

“He was rotating his hips, he was giving it some stick. And I thought, ‘Oh my Lord he is not only funny, he’s going to really give this a go. I wasn’t expecting that.

“I was like, ‘That is actually amazing’. I assumed Bill would be quite stiff and uncomfortable. Shirley said: I’m sure when you’re in a boy band and you listen to your music they have natural rhythm. I wouldn’t think musicality would be a problem for him. So I’d say he’s another one in the running. Shirley said: Nicola didn’t look like she had a nervous bone in her body, and Katya is a seasoned pro. She obviously said I’d like to dance with a woman, the BBC have done it. I hope people will get behind them. Shirley said: Clara is an ­absolutely beautiful lady. She has such lovely posture, looks incredible and has lots and lots of potential. In the brilliant hands of Aljaz, she could be a contender. Shirley says Bill will give this series a go

Shirley said: I told Craig: “He’ll be our Ed Balls and the series is going to be fun” and then he danced. He was giving it some stick. And I thought, he’s not only funny. He’ll give this a go. Caroline has a gorgeous body and great posture, says Shirley

Shirley said: She danced when she was younger. She’s understated how she dresses. So you think I’m not sure, and she walks and you see this little turnout. She’s got beautiful leg, gorgeous body, great posture. HRVY is one to watch, says the head judge

Shirley said: He has the neck of a ballroom dancer. His long arms mean when he goes into ballroom frame it will be exquisite, and as Janette’s so little he’ll be able to fling her everywhere. Watch him. Shirley said: That looks like it’s going to be a fun partnership but she did look a little bit nervous. Anton can bring fun and serious numbers, he can do ballroom, latin, and can tailor that to any individual. Jamie looks like a man on a mission, says Shirley

Shirley said: He looks like a man on a mission. I think he’s got a point to prove to himself, and Karen will bring the best out of him. There’s pressure on everybody because they want their student to be the best. Shirley said: This was cute. Their choreography was a bit more complicated as he picked her up and whizzed around. Luba has lots of creative ideas so it’ll be interesting to see where he goes.

Shirley said: He looks incredibly regal, very straight, and seems to be very on top of it. JJ spoke really nicely and eloquently, and he’s going to give it a really good go. Shirley said: She was able to keep up with him and she didn’t look nervous. She looked quite relaxed and is used to being on TV, as well. You could see some of them were nervous but she looked quite comfortable.

UK Covid lockdown rules: The ultimate guide to what you can and can’t do...

Wembley packed with ‘as many as possible’ for the Euros thanks to ‘Covid certificates’,...