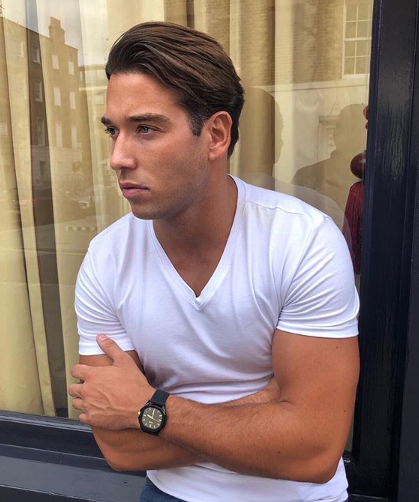 TOWIES James Lock is in therapy over a childhood trauma that rivals an EastEnders plot after fears for his mental health.

Opening up in an emotional interview fan fave ‘Lockie’ revealed that show bosses had encouraged him to see a counsellor in order to finally “sort myself out”.

Likening his childhood to ‘some sort of soap storyline’ Lockie said: “A lot happened in my childhood that people will never ever know about.

Speaking out James said: “My mum and dad divorced when I was younger. My brother and sister lived with my Mum and I stayed with my Dad. I think going through that left me with some commitment and abandonment issues.

“People misunderstand me but they don’t know what I went through.

“I had a lot of issues as a kid and went through horrible stuff which I will probably never talk about.

“But it has affected me. I’ve never admitted that before but it has.

“I’m not blaming my parents – I have a good relationship with my Mum and Dad and I owe them a lot, but it did have an impact on me and now I’m trying to understand that and work through it. I’m not making excuses for my behaviour but it has affected me and shaped who I am.”

Lockie has been a firm favourite with fans ever since joining the hit show back in 2013.

But chatting in a Sun exclusive he admitted he often struggles under the public scrutiny of fame.

He said: “Don’t get me wrong. I absolutely love being on TOWIE, they have helped me massively both in my career and personally and I am very grateful to be on the show.

“But the industry as a whole is very fickle and very false, which doesn’t help my insecurities. Fame is a blessing and a curse but this is helping me to manage the bad side of fame.”

“There’s a lot that comes along with it that people don’t realise.

“It has opened a lot of doors and I don’t regret getting on TOWIE but it is hard being scrutinised all the time.

“I come from a council estate. When you aren’t trained for this life-style it can be hard.

“I could have gone down a bad route without TOWIE so I’m grateful for everything that has happened. I definitely have a better life because of TOWIE but it’s not as easy as people think.

“It has still brought me a lot of headaches.”

The cheeky chappy has been involved in some explosive rows over the years, especially with his ex girlfriends’ Danielle Armstrong and Yazmin Oukhellou.

His toxic on-off relationship with Yaz led to them both taking a break from the show last year on advice of bosses.

They returned earlier this year but eventually split up in the summer after nearly three-years together.

Opening up about the break-up he said: “I am a little bit wild at times and I do need some structure in my life.

“I’m not going off the rails but I am enjoying going out and having fun. I just want to be happy.

“Yaz is beautiful and I love her but she is too insecure. I honestly didn’t make her like that. She has issues from a previous relationship.

“She will tell you herself she is insecure and jealous.

“It will take a better man than me to help her deal with those issues.”

Sources on the ITVBe show reveal Lockie is one of the most popular cast members with cast and crew.

Talking of best pal Pete Wicks he added: “Pete, (Tommy) Mallet and all the boys have really been there for me. They have been through everything with me.

“But Pete especially is my pillar and my rock. We are genuine best pals. It isn’t a showmance I love him to bits.

“He is always there for me night or day. He’s a complete gentleman.”

Love Islands Sophie and Connor will come face to face for the first time...

What is the Royal Standard flag and why is it draped over the Queen’s...