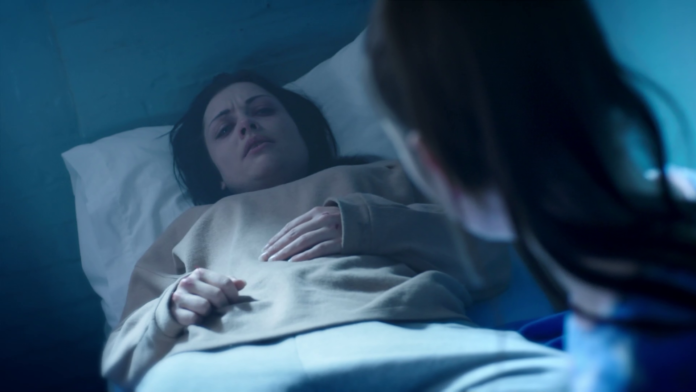 The former lawyer spotted the hole in the ceiling in Whitney’s bedroom where Leo had been stalking her for weeks and realised the evidence could clear her name.

Why is Whitney in hospital in EastEnders?

EastEnders fans know that Whitney is in hospital hooked up to a drip after fainting from hunger in her cell.

She repeatedly punched the walls of her cell when she discovered the news, before embarking on a hunger strike to protest her lack of voice as she demanded to see a solicitor.

But the hunger pangs resulted in a series of nasty hallucinations involving her younger self and the voice of her childhood abuser Tony King.

Following the traumatic flashbacks, viewers watched in horror as Whitney collapsed onto the floor.

Last night’s episode of EastEnders saw Gray visit Whitney in hospital to reassure her that he was going to get her released from prison.

Gray also begged her to start eating again and get her strength up for the trial – which he said was her only chance to be heard.

But Whitney deliriously insisted she wasn’t going to eat until she had her proper say.

What has Gray discovered in EastEnders?

Fans were left cheering this week as Gray finally worked out that Leo had been stalking Whitney from the attic above her room – a key piece of evidence which the police had repeatedly missed.

Determined to find a clue ahead of Whitney’s hearing this week, Gray wandered to her house in search of it.

Frustrated by not finding anything, he threw himself down onto the bed and shut his eyes.

When he opened them, he was stunned to see what Whitney and the police officers and forensic team had missed – Leo’s peephole.

Shouting for Sonia, he climbed up into the loft and was aghast to find Leo’s pictures of Whitney along with his snacks and crumbs.

“Don’t touch anything… we’ve got him,” Gray said as he turned triumphantly to Sonia.

What’s going to happen to Whitney in EastEnders?

EastEnders are yet to confirm the outcome of Whitney’s latest bail hearing – which is set to air this week – and fans will have to tune in to find out whether justice prevails.

But now that Gray has the evidence he needs to prove that Leo’s death was an act of self-defence, things are certainly starting to look up for Whitney.

Official spoilers have revealed that Gray is going to relay the news to Whitney that he has evidence which could clear her name.

But Whitney is going to be completely thrown off by Gray’s discovery and horrified at the idea of Leo having stalked her for weeks from above her bedroom.

Are Gray and Whitney going to have an affair.

Fans of the BBC One soap are convinced that Whitney and Gray will have an affair after noticing chemistry between the pair as he tries his best to free her from prison.

Gray would certainly rival Whitney’s other evil exes, given that he’s currently embroiled in an abusive relationship with his wife Chantelle.

Recent shocking scenes saw the brute throttle her after announcing she was to blame for his suspension from work.

This week, viewers watched Gray bristle as Chantelle announced she was starting a new job at a call centre to make up for Gray’s lost job.

Unsurprisingly, Gray was furious at the announcement and was left stewing as his wife headed out of the house.

Viewers will have to tune in to find out whether any seeds of romance grow between Whitney and Gray, or whether Whitney has a lucky escape.

Why is Emmerdale not on ITV tonight?

PM Liz Truss pledges to double spend on Ukraine war by the end of...