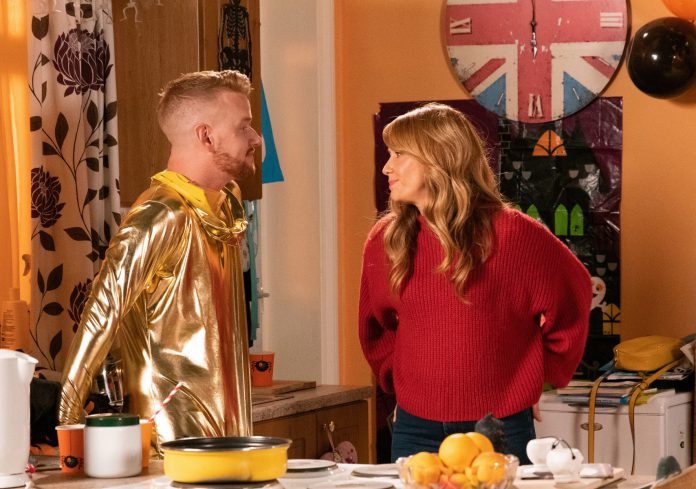 CORONATION Street is lining up a shock pregnancy plot for Maria Connor and serial killer Gary Windass as their relationship heads for trouble.

The hairdresser – played by actress Samia Longchambon – is going to send shockwaves across the cobbles with news of her pregnancybut is the pairs romance doomed? Heres everything we know about their relationship so far…

When is the baby due?

The Sun exclusively revealed this month that Maria would confirm her pregnancy with super villain Gary’s baby in the Rovers while urging everyone to keep it a secret.

But Corrie fans will have to wait to find out when the baby is due as exact details are being kept under wraps for now.

How long have Maria and Gary been dating?

Sparks first flew between the pair last month when Maria forgot her purse and Gary stepped in to pay for her shopping.

It didnt take long for Maria to fall for Gary’s charms as she agreed to babysit his son Jake in return for the favour, and there was obvious chemistry between the pair.

Maria then made the bad mistake of arranging a date with bad boy Gary at the end of last month but the pair are yet to make it official.

How many kids do Maria and Gary have already?

Gary is no stranger to being a father – he already has a son Jake with former lover Izzy Armstrong.

He also has Zack after a one night stand Nicola Rubinstein.

Maria has a son Liam with her late ex Liam Connor and unfortunately suffered a stillbirth in 2008 at six-months pregnant.

What do we know about their relationship?

Maria and Garys relationship didnt get off to the best of starts on the ITV soap.

The unlucky-in-love hairdresser has recently struggled to shrug off attention from her ex lover and drug addicted doctor Ali Neeson.

And after a tip off from Adam in an episode at the end of last month, Gary made his way to the courtyard just in time to spot Ali and Maria leaning in for a steamy kiss.

Later, Maria admitted the smooch to Gary, but insisted I dont want this to end. I really, really like you. I dont want him, I want you.

You must think Im mad, Gary replied before storming out of the hairdressing salon.

But Gary will go to great lengths to win over Maria from his rival Ali in the coming months and things get serious very quickly.

Discussing her characters relationship with Gary, Samia recently said that she fears the worst for Maria:

I think it has trouble all over it because Gary is a bad lad.

She added: Maria doesnt know that though and thinks that they have a lot in common, both being single parents of boys of a similar age.”

She also said: They start a nice friendship and theres a natural progression into a relationship, but Maria definitely doesnt know what shes getting herself into.

Nicola Sturgeon claims Alex Salmond may have wanted her to ‘cover up’ sexual misconduct...

Great value Mother’s Day gifts that are bound to put a smile on mum’s...

10 back to school deals – bargains that cost under £10, including school uniform...