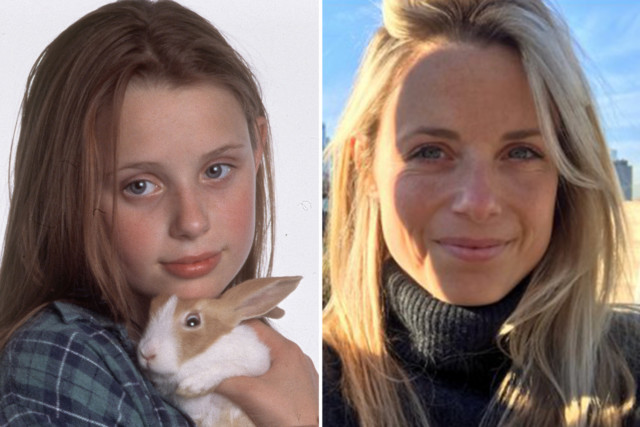 SECURING a lead role in a kids show in the Nineties was a dream ticket to stardom.

For some, like Ant McPartlin and Declan Donnelly, it led to stellar careers in the spotlight – but for others it made them realise fame was not for them.

Victoria Shalet was star of The Queen’s Nose

Many of the kid stars of classics like The Queen’s Nose, The Worst Witch and Woof! opted to trade in fame and fortune for a less high-profile career.

Here we take a look at where childhood actors who were a household name in the 1990s have ended up – including one who is now a familiar face at The Queen Vic.

Victoria rose to prominence as Harmony Parker, the heroine of TV show The Queen’s Nose, at just 14 years old.

She spent five years in the role before leaving and appearing in a number of other series.

But in 2012 she turned her back on acting and trained to be a psychotherapist.

She said: “From the age of six I was acting, but I got to my early twenties and realised my heart just wasn’t in it.

“Then I had some therapy myself and it really did make me re-evaluate what I wanted from life. I did a foundation year in counselling and knew I wanted to take it further.

“The crunch came when I was accepted onto a training course that would qualify me to be a therapist. On the same day I got a call back from an audition to be a regular in Holby City.

“When I didn’t get the part I saw it as a sign that I had to give up acting altogether to do the four-year course. I had to make a choice and I’ve never regretted it.”

Her final role was in Doctors as PC Vickie Hilton for three years.

She currently offers therapy sessions for individuals and couples at a London-based clinic as well as doing occasional voice-over work.

In 2015 she married Vigil star Adam James and they have a child together.

Heather appeared in The Queen’s Nose as Harmony’s older sister Melody and, like Victoria, she opted to leave the world of acting behind.

After appearing on the long-running series she went on to be in London’s Burning and appeared in The House That Jack Built, which were her last projects.

She went on to train as a teacher and now works at a primary school in south London after a stint at the Sylvia Young Theatre School.

Heather is married to actor Billy Geraghty and they have three children together. David gave up acting after starring in Bernard’s Watch

David got to live every kid’s dream, owning a magical pocket watch with the ability to stop time – but only in TV show Bernard’s Watch.

After the show he retired from acting, though he has appeared on several game shows including the celebrity version of BBC quiz show Pointless, where he played alongside other child stars including Outnumbered’s Tiger Drew-Honey.

In 2017 David announced he was training to become a doctor, after studying art in Venice in the early 2000s.

David, who is married and a dad, previously told the Mirror: “I haven’t acted for at least 12 to 13 years, but I used to get recognised sometimes when I was younger which was a bit embarrassing.” Jess was the famous face of the sun

As the giggling face of the sun in Teletubbies, Jess became one of the most famous babies on TV from 1997 to 2001.

She landed the iconic role after being spotted by a producer looking for smiley babies at a health clinic where she was being weighed, aged nine months.

Jess revealed in 2017: “It was just a case of sitting in front of a mirror and a camera and my dad playing with toys and race cars, that sort of thing, to try and get me to laugh at the camera.”

Jess outed herself as the sun baby in 2014, writing on Facebook: “I used to hide it but after a lot of encouragement from my friends at university, I’ve gained the confidence to come out with it. I am the sun from Teletubbies.”

Jess, 27, studied dance education and is now an actress. She is also mum to her own little ray of sunshine – a daughter named Berry. Georgina was Mildred Hubble in the show

Georgia got to play one of the most famous witches in the world – second only to Hermione Grainger – when she starred as Mildred Hubble in The Worst Witch series.

She played the struggling magic maker from 1998 until 2001 and went on to appear in a number of other shows until 2016.

She graduated from Princeton in 2008 and moved to Los Angeles before returning to the UK in 2011.

After a role in Welcome to Purgatory II: The Journey to Hell, Georgina opted to move behind the camera and worked at the BBC in their drama commissioning team.

Since then she has worked at a number of production companies and is currently at See-Saw films working as a development consultant. Clare was a finalist on Dancing On Ice

As a child actor Clare competed with sister Julie, who beat her to a part in Grange Hill.

They also auditioned for the role of Jenny Porter in the sitcom 2point4 Children – and this time Clare was triumphant.

She has since appeared in Doctors and Holby City, as well as a lead part in ITV fire-fighting drama Steel River Blues.

In 2007, she competed in the second series of ITV’s Dancing on Ice, with pro partner Andrei Lipanov, finishing as runner-up behind rugby ace Kyran Bracken.

Clare dated Declan Donnelly for 10 years before they split in 2003, and is still best mates with Ant McPartlin’s ex Lisa Armstrong.

Now 46, she is mum to a nine-year-old son but largely keeps out of the limelight. Amey found fame in creepy series The Demon Headmaster playing Dinah Hunter – the only child in the school who could resist being hypnotised by the monstrous teacher.

After the series ended in 1998, she took a break until 2015 where she played Detective Inspector Lisa Hudson in the film Souljacker.

According to her social media, she attended Newcastle University and has since gone on to become a child minder – and appears to have a child of her own.

On her Linkedin she lists herself as the director of Allelo Coaching, providing “executive coaching for members of diversity and inclusion networks, with a focus on trans staff… empowering people to have a healthy relationship with their career and with their organisation”.

Her previous jobs include being a dentist, an administrative assistant, and a candidate development manager at a recruitment agency. Edward is now a progressive educator who founded a school

At 11, the aptly named Edward Fidoe rose to fame playing Eric in Woof!, a series about a boy who can shapeshift into a dog.

He starred in the series for four years but opted to leave acting when it ended.

While he has remained mostly off the radar, he did run a theatre production company with playwright Matt Charman and worked as a consultant.

His most recent accomplishment is co-founding the pioneering School 21, which opened in September 2012 in Stratford, east London, taking pupils from four to 18.

It aims to teach children in a non-traditional innovative way. Edward has also given TED talks about education.

Like Ant McPartlin and Declan Donnelly, Nicola rose to fame on Byker Grove and was at the centre of the horrifying paintball blinding story.

Her character, Debbie Dobson, and on-screen pal Amanda Bewick, were furious that PJ (played by Ant) had been flirting with them both, leading to the fateful shot.

Since her heyday as a child star, Nicola, who now goes by the surname Garraway, has had several big career changes.

While she did continue acting for a while, landing a role in legal drama Kavanagh QC, she later turned her back on it and opted to become a flight attendant for Virgin Atlantic.

After a few years up in the air, Nicola decided that career wasn’t for her either and trained as a make-up artist.

She has also qualified as a certified personal trainer.

Nicola, who lives in the North East, is a proud mum-of-three and regularly posts pictures of her kids across her social media. Melanie was tragically widowed after marrying a fireman Martina still performs with her sister

Melanie, alongside her twin sister Martina, rose to fame as the twin cheerleaders in Fun House.

After the final show wrapped the pair moved into music and were big in Japan with their album It’s A Twin Thing.

Melanie married a fireman but tragically he passed away in 2009 from leukaemia. She still goes by her married name Bambridge.

Martina was also married and has two children but is now divorced.

The twins haven’t given up performing and can be booked to liven up parties or corporate events, according to their website. Kellie is now the queen bee at the Queen Vic

Kellie starred in various kids’ series as a child, including T-bag and Maid Marion and her Merry Men.

She went on to star as Joanna Burrows in the comedy The Upper Hand, which ran for six years.

After the series ended, however, she struggled to find acting work and worked as a waitress and a night club receptionist to make ends meet.

“I was getting rejected from one job after another and no matter how much I tried not to take it personally, a part of me couldn’t help but think: ‘I was too ugly to get that part’,” she said.

Her fortunes turned when she landed a lead role in hit drama Bad Girls in 1999, and in 2013 she was cast as landlady Linda Carter, wife to Danny Dyer‘s Mick, in EastEnders.

In 2015 she danced her way to the final of Strictly with Kevin Clifton.

Kellie and partner Paul Stocker are proud parents to three children, after turning to IVF following an infertility struggle.

Prince Andrew insists he has no memory of ever meeting sex accuser and Epstein...