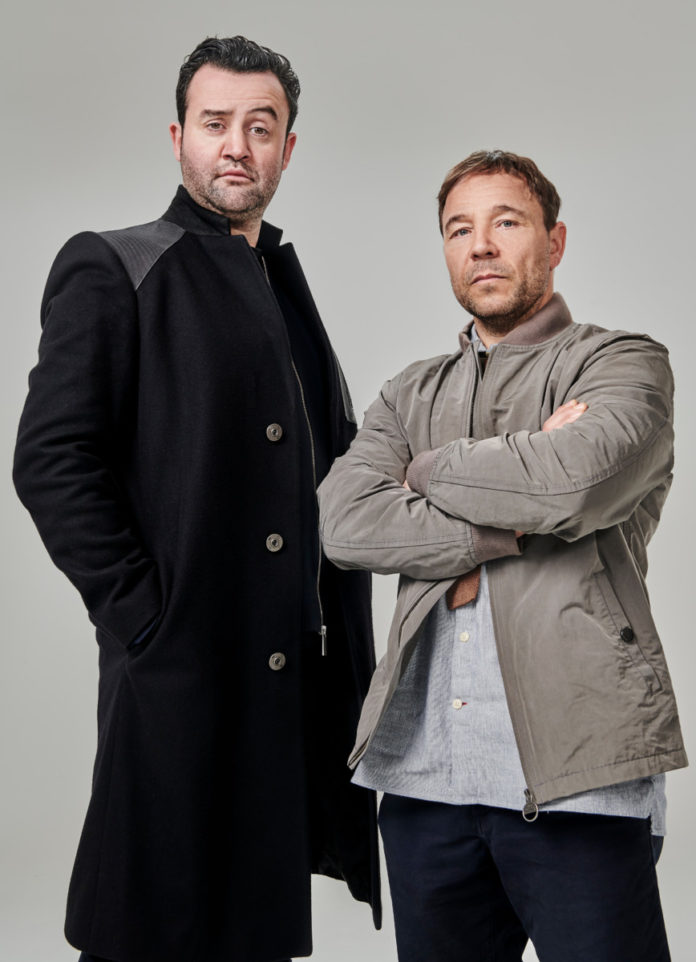 CODE 404 is set to air weekly on Sky One from TONIGHT (April 29) and fans are keen to know who will be featuring in the new comedy series.

Who will join Stephen Graham and Tracy-Ann Oberman in one of Sky’s newest shows?

He is currently appearing in the ongoing Sky series Save Me Too as convicted sex offender Fabio “Melon” Melonzola.

In Code 404 he is one half of DI Inspector duo, Roy Carver.

Speaking about his character, Graham told RadioTimes: “Major gets killed straight away… and then Roy’s kind of left on his own and a year goes by and he’s been moved right down the ranks because he realises he’s not that good without Major. It’s a proper double act.” Daniel, 42, plays DI John Major, who works in the SIU – the Special Investigations Unit – of the police alongside Graham’s character DI Roy Carver.

Major gets killed in the line of duty during a sting operation that does not go according to plan at the start of the first episode.

Speaking about his character, DI John Major, Mays said: “He’s got the most impressive, the best arrest record in the SIU, the Special Investigations Unit. But Major is nothing without Carver, they’re a formidable, sort of double act. They’re the top of the tree there.”

Mays has featured in the the Oscar-winning film 1917, the Star Wars spin-off Rogue One, TV drama Temple and Amazon’s Good Omens.

Daniel Mays will feature as DI Major, who gets killed and then brought back to life

Former EastEnders star Tracy-Ann Oberman stars in a supporting role as the as the Police Commissioner.

She can also be seen in Channel 4’s Friday Night Dinner as Valerie “Val” Lewis.

Tracy began her career in theatre and performed in famous Shakespeare plays such as Macbeth and A Christmas Carol.

Ahead of the series premiere on Sky One tonight, the 53-year-old tweeted: “Genuinely- check this series out. It’s fantastic.” The 42-year-old, who starred in Line of Duty, plays the wife of DI John Major and explained how she ended up with his friend DI Carver.

She said: “I play the wife of [Daniel May’s character] John Major, but obviously he’s been killed in action. So I’ve decided to move his partner and best friend [Roy Carver, played by Stephen Graham] in as my new fella.

She added: “Also, I’m retraining to be a psychotherapist and get my life back a bit. It becomes clear I wasn’t very happy with my marriage when John was alive, and that’s all a bit confusing for me and Stephen’s character, Roy.

“John just thinks we’ll be together as we were before, not knowing that I’ve changed and moved on. And also, he’s a bit of an idiot. Ever since the show was first announced, the anticipation has been high among fans and now the wait is almost over.

In fact, the really keen viewers will be pleased to know all six episodes of Code 404 were made available on Sky TODAY (April 29), so they can binge the show right now.

That’s not all, as the episodes will also be made available to watch on the streaming platform NOW TV.

For those who would prefer the traditional one show per week, Code 404 will begin airing weekly on Sky One on Wednesdays at 10pm, starting TONIGHT (April 29).

Dancing On Ices Brianne Delcourt says she will marry Kevin Kilbane in September ...

Who are The Masked Dancer 2022 finalists?

Which Love Island stars have transformed themselves in the pursuit of finding love?