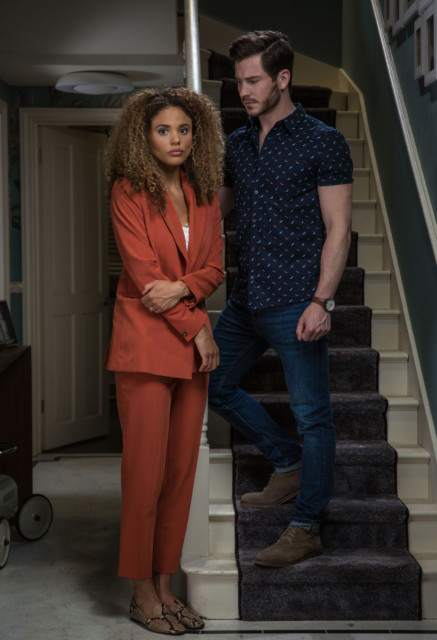 LAST night, EastEnders fans were devastated as the BBC One soap confirmed Chantelle Atkins [Jessica Plummer] will be murdered by her husband Gray as their harrowing domestic abuse storyline comes to an end.

It wasn’t confirmed when her tragic death will air, but it is not expected until later this month.

It was confirmed that the harrowing storyline will end in tragedy

Some fans were outraged that the “twist” had been ruined, questioning why EastEnders – and publications – had revealed how the story ends instead of leaving it as a surprise.

However, BBC bosses have a responsibility to warn viewers in advance due to the distressing nature of the plot – and the impact that it could have on those watching.

EastEnders are aware that the storyline will be difficult viewing, and they don’t want to risk causing undue upset by not warning fans on what they are about to see.

This way, viewers have been given the option on whether or not they tune in – and can prepare themselves as needed. In addition, show bosses don’t want Chantelle’s death to become a surprise twist that catches viewers off guard; it is vital that viewers watch the scenes leading up to her murder with the knowledge of what is to come.

The storyline hopes to raise awareness and conversation around domestic abuse – with Gray’s behaviour in the run-up to Chantelle’s death just as crucial as her murder.

Bosses don’t want the tragic outcome of the storyline to be overshadowed by the shock and upset that viewers’ feel at the time, and they are also wary of making something as harrowing as death by domestic abuse a shock tactic or plot twist.

Executive producer Jon Sen previously explained: “Chantelle’s story is such an important one to tell accurately and upon both characters’ inception we planned her tragic ending with the intention of embedding the stark reality of domestic abuse at the heart of the Atkins family. “Being able to shed light on the realities of what goes on behind closed doors has never been more crucial given the harrowing statistics as a result of the current pandemic and hopefully Chantelle’s story will encourage people to speak out to someone they trust and get the support that they need.

“Jessica’s performance is nothing short of extraordinary and even in her final scenes, the audience will be moved by Chantelle’s strength. We’re very sorry so see Jessica go but hope that her impact on viewers is long-lasting.”

It was first revealed that Chantelle is mentally and physically abused by her husband last year, and fans will see that this has only worsened during lockdown.

EastEnders has worked closely with Women’s Aid and Refuge on the storyline, and the soap said the prevalence of domestic abuse in society meant it was important to represent the issue as accurately as possible. Gray will murder his wife in the coming weeks

Refuge, which runs the 24-hour National Domestic Abuse Helpline, has seen calls and contact soar during the pandemic, while Women’s Aid said more than two thirds of survivors reported their domestic abuse escalating in lockdown.

Other research showed more than three quarters of women living with an abuser said they felt they could not leave or get away because of the pandemic.

This will be mirrored in Chantelle’s storyline, as she has been isolating with Gray and the show picks up as she makes the big decision to file for divorce.

After attempting to escape, she will be killed by her abuser. Chantelle will attempt to escape

Actress Jessica said: “It’s been such a privilege to play Chantelle and to be able to tell her story.

“Sadly what she goes through is all too common and her death is a reminder of the devastating effect of domestic abuse.

“I’ve known it wasn’t going to end well for Chantelle for a while now and although it was a shock to find out her fate, far too many men and women suffer in silence so I hope that by raising awareness we can ultimately save lives.

“I am so grateful to all the team and my lovely cast members for being so supportive, I’ll miss Albert Square!” EastEnders worked closely with charities for the disturbing story

Lisa King of Refuge added: “The Covid-19 crisis has magnified the reality that many survivors like Chantelle face every day.

“Domestic abuse is the biggest issue affecting our society and millions of women and girls remain trapped with an abusive partner.

“Sadly, Chantelle’s murder is not an isolated incident – on average, two women a week are killed by a current or former partner in England and Wales.”

EastEnders returns to BBC One tonight at 8.05pm and will air four nights a week.

If you have been affected by this article, contact Refuge’s National Domestic Abuse Helpline on 0808 2000 247 or click here

Universal Credit boost of £20 a week may be extended AGAIN in autumn, minister...

Emmerdale fans disgusted with Chas Dingle as she makes sickening excuse to hide her...