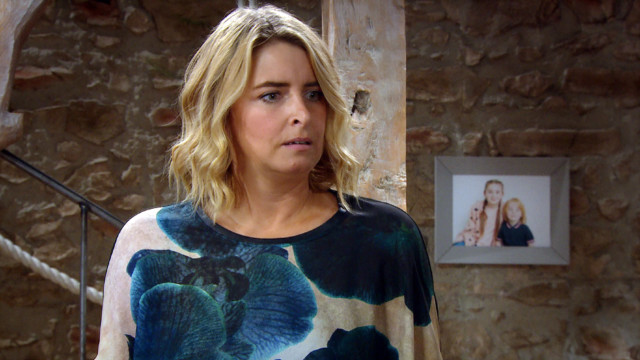 So where is Charity’s fiancee Vanessa and why isn’t she in Emmerdale village? Here’s the lowdown…

Why is Vanessa not in Emmerdale

Vanessa departed suddenly from the village in May last year as she continues to battle bowel cancer.

Charity casually revealed the news at the time, announcing that Vanessa had moved in with her mum to focus on battling the disease.

But as fans will of course know, Vanessa’s exit was actually to facilitate actress Michelle Hardwick’s maternity leave.

Michelle welcomed a baby boy with her wife Kate Brooks in October 2020.

The star announced the happy news on social media, writing on Instagram: “On Friday 9th October, this handsome little chap entered the world.”

She added: “Edward ‘Teddy’ Peter Brooks we are so in love with you #ourlittleTeddyboy.”

Will Vanessa return to Emmerdale?

The news that Michelle is having a baby has left fans fearing that show bosses will kill off her character after losing her battle with cancer.

And Michelle didn’t reassure viewers when she said she had always known what the ending for Vanessa’s cancer storyline would be.

She told Radio Times: “I won’t say which way it goes, but I was told straight away.

“As soon as [Emmerdale’s executive producer] Jane Hudson brought me up, she told me the storyline and the outcome.

“It wasn’t a case of ‘here’s the story but we don’t know yet’. So I’ve always known what happens in the storyline but my lips are sealed…”

But soap bosses are yet to confirm whether Vanessa will return to the Dales or whether the character will die off-screen.

So viewers will have to tune in to find out. Are Charity and Vanessa over in Emmerdale?

It’s certainly not looking good for Charity and Vanessa after the pub landlady slept with Mackenzie following her split from Vanessa.

And it looks like fans should be worried as actress Emma Atkins – who plays Charity in the soap – recently said she thinks Charity has resigned herself to the fact that she’s lost Vanessa.

Speaking to Metro.co.uk, Emma revealed: “Charity is on a mission of self destruct. She is utterly heartbroken and seems intent on spiralling further and drowning her sorrows on a daily basis, with no regard for those around her.

“She seems to have lost all moral responsibility, and has no desire to put right her current circumstances.

“She has resigned herself to the fact that her actions are beyond repair. After receiving Vanessa’s letter, Charity realises her actions can’t be undone and what she did was unforgivable in Vanessa’s eyes, along with most of Charity’s friends and family.”

She added: “She has lost all self-respect at this point and is oblivious to the consequences of her actions.”

But fans needn’t worry as Emmerdale scriptwriter Sharon Marshall has suggested thing things will work out for Vanessa and Charity in the end.

Speaking on This Morning, she revealed: “My Twitter stream, I’m seeing your messages, so I’m hearing everyone.

“Of course Vanity isn’t over. We know you love them, we love them. But of course, the lovely actress went off and had the most beautiful baby in the whole wide world, Michelle, so she’s on maternity leave.

“What this is is Charity getting something wrong in her head and doing her usual thing – self-destruction, being an idiot, being hedonistic. There is a kiss coming up with a total stranger… But look, she loves her.”

She added: “We’ve not forgotten about Vanity. We love them as much as everyone else.”

Amanda Holden goes braless on the first chilly day of autumn as she leaves...

General Election 2019: What Britain would look like if Marxist Jeremy Corbyn got elected...

Love Island fans convinced Georgia Harrison and Theo Campbell are dating after they get...