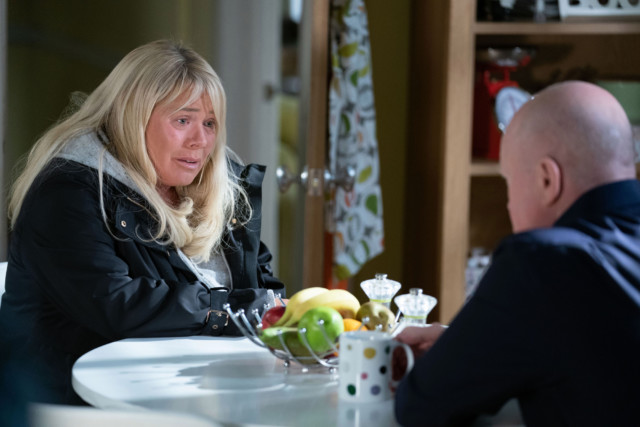 PHIL Mitchell gets a taste of his own medicine next week in EastEnders when Linda refuses to sell him the Queen Vic after the awful way he’s treated Sharon.

Phil kicked Sharon and baby Kayden out onto the streets after she decided to keep him. But will Sharon buy the Vic for herself as revenge? Here’s everything you need to know…

Phil has kicked Sharon and Kayden out in EastEnders

Why does Linda refuse to sell the pub to Phil in EastEnders?

Linda refuses to sell the pub to Phil after she gets wind of him throwing Sharon and baby Kayden out onto the streets.

Fans will remember that Phil previously put his foot in it when Linda attended a new support group and was horrified to see Phil there.

When Linda insisted on Phil attending another meeting, Phil shared some harsh truths with Linda about her recovery – which didn’t go down well with Linda. Linda refuses to sell the pub to Phil

Will Sharon buy the pub for herself in EastEnders?

Mick, who’s already put down a deposit for the flat, is desperate to continue with the deal and asks Sharon to persuade Linda to sell the pub to Phil.

Sharon tells Mick she can’t help but agrees that Linda needs to get free of the Vic to aid her recovery.

Later, Sharon takes matters into her own hands.

EastEnders are keeping shtum about what exactly this means, but might Sharon buy the Vic for herself?

Why does Sharon keep putting up with Phil’s awful behaviour after all these years?!? She should just buy the pub herself and run it with Mick as the bar manager. #EastEnders @bbceastenders

EastEnders fans are convinced getting her hands on the pub would be the perfect revenge for Sharon.

One fan tweeted: “Why does Sharon keep putting up with Phil’s awful behaviour after all these years?!? She should just buy the pub herself and run it with Mick as the bar manager #EastEnders.”

Another added: “IMAGINE AND INJECT IT: Sharon kicks Phil out on the opening night of the Vic and says, “I never wanted you back, Phil. Only Kayden and the Vic for a fresh start. One that didn’t include you. I played you like a violin and you fell for it….Now get out of MY pub.” All the biggest changes coming in the Minecraft 1.20 update

Supporters of Priti Patel say MPs who block her plans to crack down on...

Who is Wallace Wilson? Love Island 2020 contestant and personal trainer from Inverness