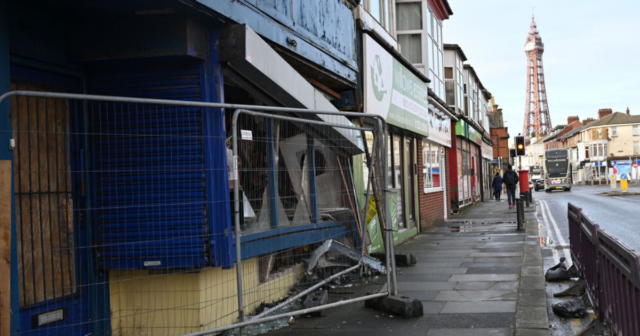 A STONE’S throw from the glamour of the Blackpool ballroom which hosted last night’s Strictly, a man takes a large gulp from a can of lager as he strolls past a boarded-up shop.

He is trudging along crime-ridden Central Drive, a neglected boulevard in the shadow of the northern seaside town’s iconic Tower.

Boarded up buildings decay in the shadow of the Tower

Mere metres from the razzamatazz of the BBC’s flagship dance show, which returned there for the first time in three years, lone drinkers and hooded figures are on the prowl.

The high street, once lined with boutique shops, smart cafes and cinemas, is now riddled with derelict buildings caving in on themselves and row-upon-row of budget stores.

The boulevard is so run-down locals have nicknamed it “Beirut” and claim they are too terrified to shop alone as drug dealers loiter on corners and teenagers target stores.

There were a staggering 555 crimes in the area in September alone, with the vast majority relating to anti-social behaviour.

Local Miles Bruschan, 55, tells SE: “The Strictly effect makes people want to come to Blackpool, but the glitz and glamour doesn’t exist outside of that ballroom.

“It isn’t our reality. It’s a world-away from what it’s really like. The streets behind it are decaying and derelict.

“It’s obviously good for tourism as it gets people thinking of Blackpool, but it skews people’s perceptions.

“It’s a once-yearly event and the Tower Ballroom is a ballroom for the country, not for locals. 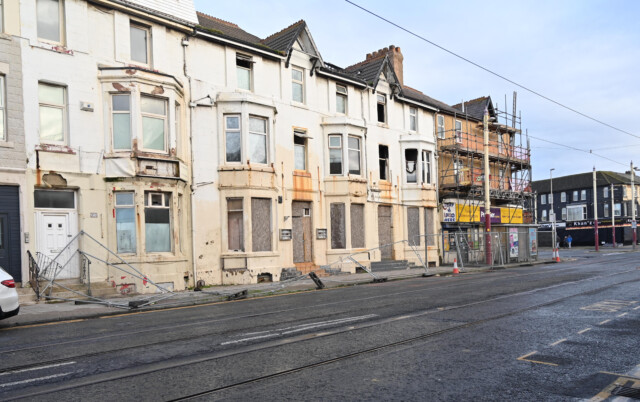 Many once-fine buildings are collapsing 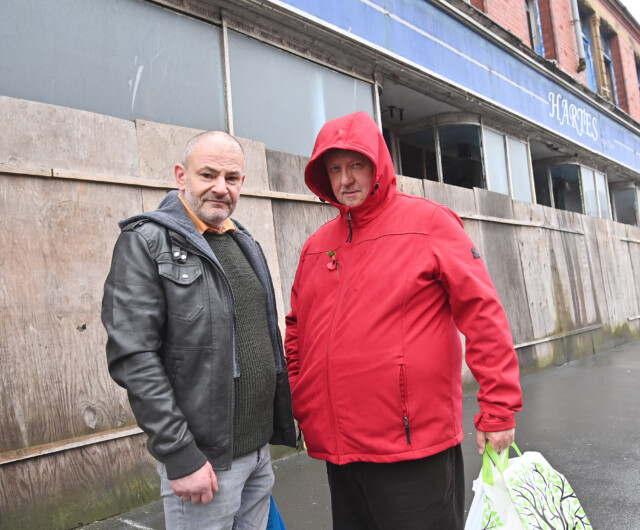 “I have mixed feelings about it because if people are coming just to see the ballroom, are they really stopping here and helping the area?

“Blackpool might have a wonderful ballroom but the town is falling apart. It’s a historical place but it’s lost a lot of its character.

“It’s just concrete. There’s no plants and some of the work that they have carried out is a mess.”

The Lancashire town has an unemployment rate of 25 per cent, compared with the nationwide figure of 13.

Miles, a business travel agent, adds: “There’s a huge unemployment issue. There’s no other industry here apart from tourism, which is suffering.

“If all the hotels and businesses are closing there will no longer be any jobs for the locals.”

Maryll Maycock, 74, is a retired cook who moved to Blackpool 10 years ago.

The grandmother is a huge Strictly fan but is unable to get tickets for the event, despite it being on her doorstep.

She tells us: “Strictly is all glitz and glamour but the locals never get to go. We’ve applied every year since we moved here and have never been selected.

“I’ve only been to the ballroom to watch the local dancers. There’s a dancer who has been here for years and she’s never got a ticket.

“It’s not right. Why should people who never come to the town get to see it? They should open it to people on the street.

“The event doesn’t reflect the town because one street over it’s derelict and has been left behind.

“The council is getting a huge grant and I hope they invest it in local infrastructure.

“They need to sort out the high street. More tourists would come if more money was spent restoring it to what it was in its heyday.

“It’s such a shame because years ago it was thriving. I used to come here all the time. We had a caravan and brought our grandson to see the illuminations ever since he was a baby.

“People still come here every year, and they love it. They’re drawn in by the lights and the lovely seafront but the back areas have been neglected.

“They’re regenerating the car park for the sea front and yet the street behind it looks terrible.

“All the shops are boarded up and have been replaced with budget shops.” 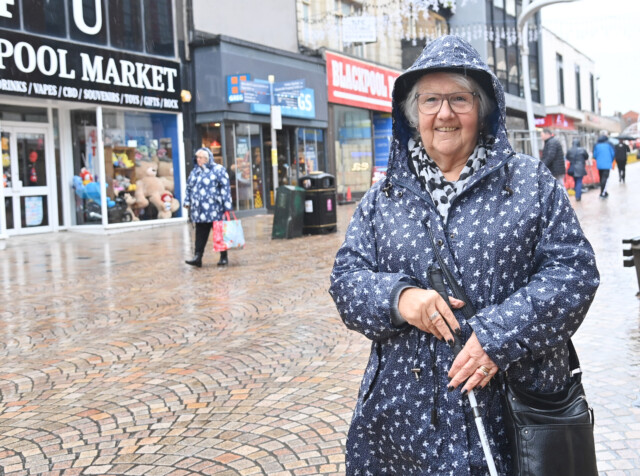 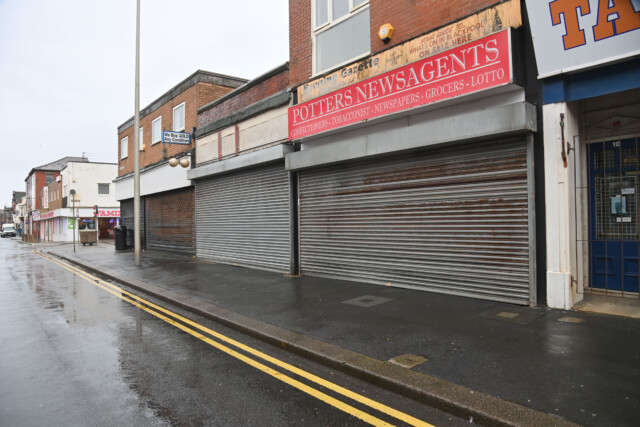 Many shops have closed down 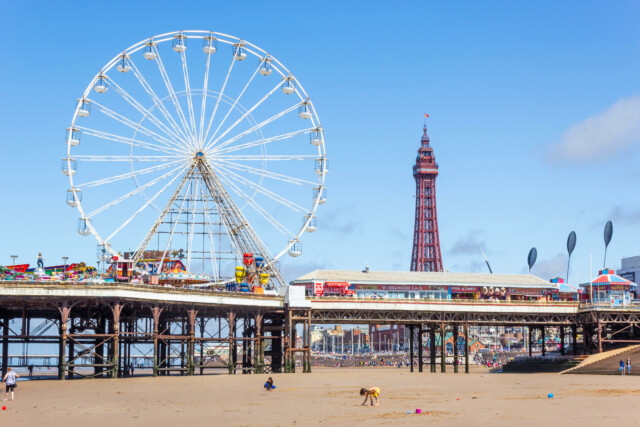 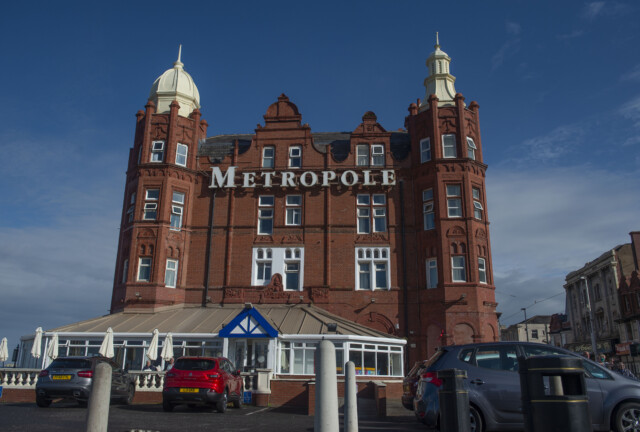 The historic Metropole Hotel is currently home to 400 asylum seekers

On the high street one shop front has completely collapsed and is filled with rubbish and debris, while a ramshackle hotel is covered in soot and ash after the dilapidated building was engulfed in flames earlier this year.

It’s a world away from the charming promenade, where holiday-makers stroll while taking in views of the Irish Sea.

The two-mile stretch of road on the seafront boasts Blackpool Tower, which has hosted Strictly since 2009, a water park and a zoo.

The promenade is also home to Blackpool Pleasure Beach theme park, which once held the record for the highest rollercoaster in the world.

Despite its rich history, the town has suffered a sad decline in tourism, with locals blaming cheap package holidays to sunny destinations like Ibiza.

The once grand Metropole Hotel, which still sits proudly on the seafront, used to be reserved for A-listers but is currently home to 400 asylum seekers.

A week ago the town was awarded a £40m levelling up grant, which will see Blackpool Magistrates Court demolished and relocated, freeing the area up for leisure developments.

But locals claim this isn’t enough and say the council needs to restore the back streets to their former glory. 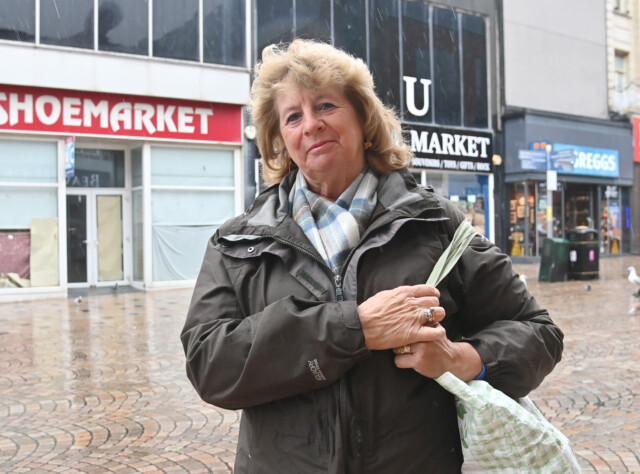 Karen McKinlay says the streets are full of junkies 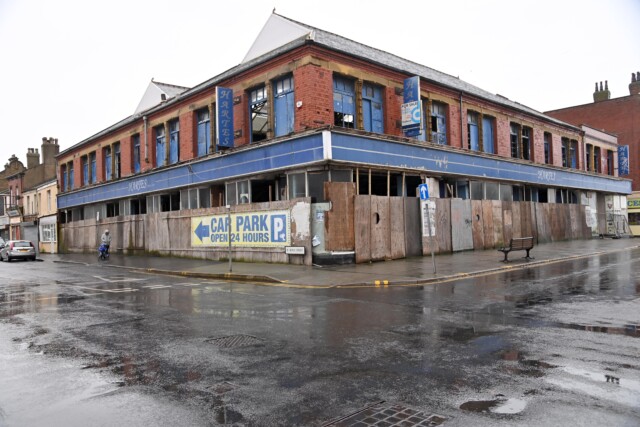 An old department store has been left to rot

Karen McKinlay, 66, is a retired mental health worker who has lived in Blackpool all of her life.

She says: “Strictly brings people into the town but I have reservations about how much it does for the area.

“I don’t think the stars wander around the tatty streets behind the ballroom, they probably have a safe place to stay.

“My husband refers to the area as Beirut because it’s so run down, it’s like a shanty town.”

Karen claims half the shops are now “caving in on themselves” while the rest are “severely neglected” or budget shops.

“The street is filled with junkies, alcoholics and prostitutes. I tell people to avoid Central Drive,” she adds.

“The Metropole Hotel is housing asylum seekers. The hotel used to be the most prestigious in the area – it speaks to the decline in tourism.

“I feel sorry for them and understand they have to go somewhere but we should be looking after our own. We should be investing in social housing and helping the homeless on the streets of Blackpool.

“We should be giving locals priority on accommodation and shelter.” 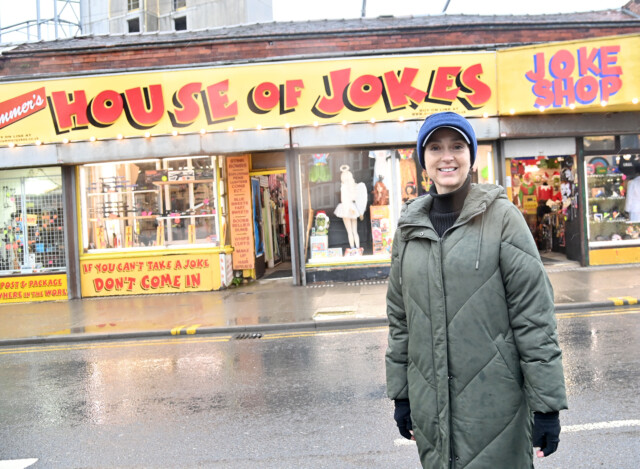 Joke store owner Sam Parker, 52, has lived in Blackpool her entire life and says Strictly is great for putting the town on the map, but it’s not enough to rescue it.

She says: “Over the years there’s been a decline of the high street and B&B guest houses.

“People used to come to Blackpool for up to a week but now they only come for a day.

“This morning I parked my car and one of the builders said, ‘Don’t leave anything on display because I’ve just seen a break-in’.

“The kids aged between 10 and 15 terrorise us all summer. They come in and pinch stuff.

“They’ve always been a nuisance but they’re getting worse because nothing is done about it and they know they can get away with it.”

Sam has been told her family run business, which opened in 1969, is being forced to shut in January as a result of the £300m leisure development.

She adds: “Our shop is being knocked down to make way for the car park. It’s annoying, because we’re thriving as a business.

“The area does need regenerating, however there are so many shops which are shut and the unemployment rate is sky high, so you would think they would incorporate us in their plans.

“We’ve been here for decades and are keeping people employed. It’s really sad because the store means a lot to locals.”

One resident who asked to remain anonymous adds: “The high street used to be wonderful. Now it’s a dangerous place to be.

“An elderly woman I know was mugged there at 4pm in broad daylight.

Steven Waters, 46, moved to the area last month from Swindon.

Currently unemployed, he says he travelled to Blackpool frequently as a young lad and was attracted by the low house prices, but insists the area needs a makeover.

He says: “When you see Blackpool on Strictly it looks marvellous and puts a certain image in your head of what it’s like.

“When people come to visit it doesn’t live up to their expectations.

“If people were to come here after watching the show they would be shocked.

“There’s an abandoned Woolworths in the centre. It’s an eyesore, the ceiling is caved in and it’s been left to rot.

“There’s more homeless people around now – that needs sorting out.

“If tourists come here and see the burned down buildings they won’t want to come back.

“The town could be restored to what it was in the 80s. It just needs a drastic makeover.

“Blackpool’s appeal was that you could come on a whim and there was always somewhere to stay and always something to do, but it isn’t like that anymore.

“It was ruined by package holidays. Saying that, Covid meant more people holiday in England and Blackpool was busy this year.

“So who knows, maybe new holiday habits will encourage tourists to visit.”

I’m a plumber – a simple settings change can cut your water bills by...

The weirdest Royal Family Christmas traditions revealed – including why the Queen WEIGHS every...