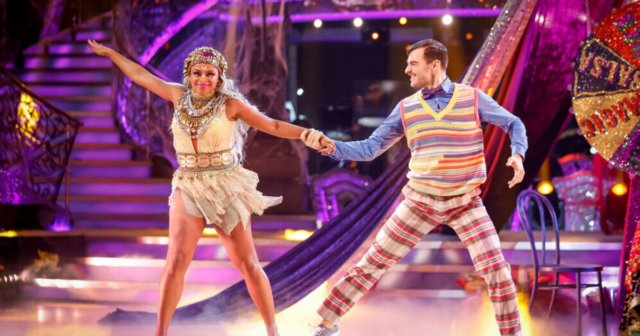 STRICTLY star Fleur East has rubbished the show’s notorious curse – saying her sexy routines in the ballroom have transformed her marriage.

Fleur, who is married to Marcel Badiane-Robin, revealed: “It was like we got married again after the Argentine Tango, I’ve got to say.

“If you want the spark to be reignited in your marriage, do Strictly.

“Because honestly, we’ve been together 12 years, when has he ever seen me in a new look every week moving my hips like that.

“When do you ever get to do that for your partner?

“It’s like I’m performing for him, every Saturday night. I just want him to sit there and go: ‘Wow, that’s my wife!’

“The Strictly curse? That’s not even a concern for him.

“He’s like: ‘Fleur whatever you need to do’. He’s my biggest cheerleader and he’s like, ‘if you need to be passionate in that dance then I need to believe the passion.’

“When he comes to rehearsal there’s no fooling him. He’s like: ‘Nah, she can bring more than that!’

“We’re so much closer now because we’re going through this together and we are just spending so many more intimate moments and he’s just gets it.”

McDonald’s to add delivery at 500 restaurants next week

Boris Johnson will serve Christmas lunch to British troops in Estonia to mark their...

The Masked Dancer’s Prawn breaks silence with an apology after getting the boot on...