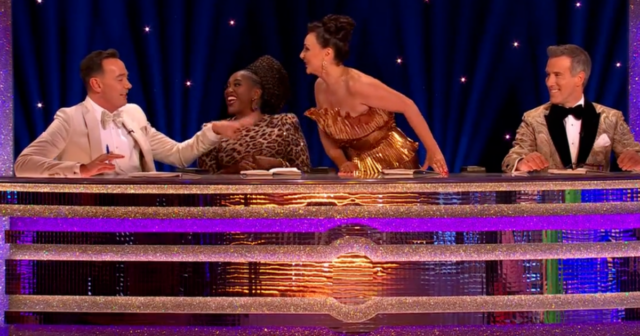 It happened after Helen and Gorka’s dance

However Craig had to give a little critique giving his feedback.

He said: “I thought your frame was a little down.”

The audience and the rest of the judges weren’t happy with his comments.

So much so that Shirley got up to tell him what she thought – however Craig wasn’t having any of it.

Viewers watching at home loved how sassy he was.

One wrote on Twitter: “Lovin Craig – Shirley, sit down! #Strictly.”

Another added: “Craig: “Shirley sit down…,” and a laughing emoji.

A third chimed in: “Craig saying Shirley looks like a lampshade #strictly.”

“Craig calling Shirley a lampshade is brutal but hilarious,” a fourth said.

Despite the harsh critique, the pair were awarded an incredible 39 out of 40.

Tyler West and Dianne Buswell, Molly Rainford and Carlos Gu, and Will Mellor and Nancy Xu were all awarded 35.

Kym Marsh and Graziano Di Prima got 33 and Ellie Taylor and Johannes Radebe were given 31.

Meanwhile other fans were left raging after a number of technical blunders ‘ruined’ tonight’s Blackpool special.

This evening’s instalment of the BBC dance show returned to Blackpool Tower Ballroom at the seaside resort.

During Ellie Taylor and Johannes Radebe’s performance, there was a number of slip-ups, including filming her getting into a harness as she was slowly lifted into the air.

While others have said that they focused more on the backing dancers, rather than the celebs.

Boris Johnson urges Sun readers to back Conservatives in General Election to get Brexit...

Casa Amor’s Eva reveals she was scouted by Love Island producers and quizzed about...

Strictly fans are all saying the same thing as Kym Marsh is eliminated after...