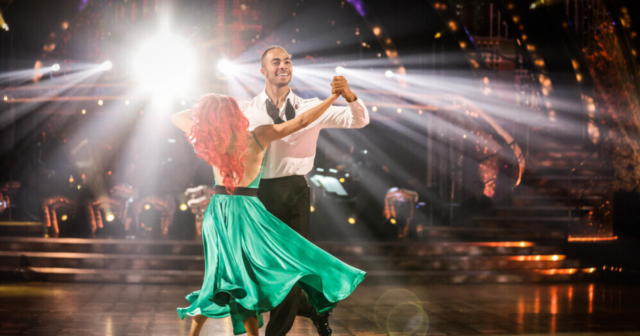 STRICTLY Come Dancing’s Tyler West has revealed the heartbreaking reason behind his emotional dance for this weekend.

Tyler, 26, and his pro partner Dianne Buswell will be performing the Paso Doble to Unstoppable by E.S. Posthumus on Saturday night’s live show.

Tyler has revealed the emotional reason for him doing the show

Dianne’s been putting the pressure on this week

Appearing today on his KISS FM show, the presenter told his fellow hosts Jordan Banjo and Perry Keily that he’s doing the show for his late nan.

He said: “My nana bless her, she was my closest and she’s never got to see any of my presenting work.

“Strictly was her favourite show so every single time that I go onto that dance floor, I’m imagine nana is looking over me.

He added: “She passed away before I got my first presenting gig on CBBC, so it feels like every single job I do in this industry….

“You get this giddy butterfly feeling when the reason that you’re doing it is bigger than yourself and it means that you can do something completely different in your stride and you just love and enjoy every second of it no matter how difficult it gets.”

And it seems Tyler is taking this week very seriously.

He recently shared a snap of him being put through his paces by Dianne, with his upcoming routine seemingly requiring literal blood, sweat and tears from him for the BBC series.

The sweat part in particular he’s taking very seriously, and by 10am on Tuesday, while viewers at home would’ve likely only been in work an hour, Tyler was drenched in sweat in the rehearsal studio.

Sharing the video on Instagram, Tyler was literally dripping as he stared unimpressed at the camera.

Prince Harry has turned his mum’s death into a ‘mini industry’ with ‘whinging’ &...

Reopening dates for gyms, pools and nail bars set to be revealed tonight

PS5 review: Xbox rival has better games and the BEST joypad – but it’s...