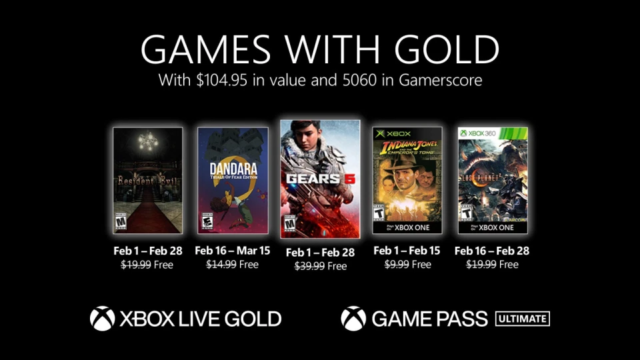 YOU can bag a load of free games for Xbox, PS5, PS4 and PC this week.

We reveal how to claim these freebies – kicking your February off in the very best way.

You can bag five free games in February with Xbox Gold

There are five free games available in February 21.

Gears 5 is the headline freebie this month

The first is Gears 5, which has been optimised for Xbox Series X and S.

This popular third-person shooter is available from February 1 to 28.

You’ll also be able to bag a remastered version of Resident Evilbetween those same dates too.

From February 16 to March 15, you can get Dandara: Trials of Fear Edition.

It’s a platformer with attractive pixel art and an original soundtrack.

Between February 1 and 15, you can get Indiana Jones and the Emperor’s Tomb, taking on the Nazis and a criminal underworld to track down a mysterious artefact.

Finally, there’s Lost Planet 2 – a space shooter up for grabs from February 16 to 28.

PS Plus is a premium subscription service for PS4 owners that gets you free games.

There are three free games available with PS Plus this month. The first game is only available on the PS5, and it’s brand new to boot.

It looks great and truly wild, aptly described as “metal-crunching” by PlayStation. Control: Ultimate Edition is one of this month’s PS5 and PS4 freebies

For PS5 and PS4 owners, you can also bag Control: Ultimate Edition.

It’s a supernatural third-person action adventure from the makers of Max Payne and Alan Wake.

Lastly (and also available on PS4) you can claim Concrete Genie.

It’s an arty action-adventure where you wield a magic paintbrush in a bid to return a once-bustling polluted seaside town to its colourful former glory.

These items are yours to keep forever, including the free games.

And you also get a free subscription on Twitch.tv.

Twitch is about to drop a load of games in February.

But in the meantime, you can still claim Algo Bot until February 19.

Holly Willoughby ‘will have to skate on Dancing On Ice’ if there are more...

Tommy Fury works out in the gym on Boxing Day – but fans insist...