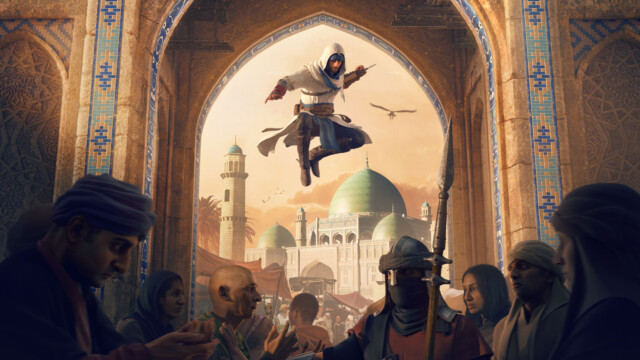 ASSASSIN’S Creed developer, Ubisoft, has announced four new games coming to the series, including one set in an era fans have been begging for.

Codenamed Project Red, one of the next Assassin’s Creed games will be set in the land of samurai and ninja — feudal Japan.

It will be an open-world RPG, and will be the next mainline game for the series.

Ubisoft Québec, the studio that developed Syndicate and Odyssey, will be heading up development.

Jonathan Dumont, known for writing Odyssey and another Ubisoft title Immortals Fenyx Rising, will serve as the creative director.

The teaser trailer leaves a lot to the imagination, as not much about the upcoming game is revealed.

In it we see a shadowy figure land on a pagoda-style rooftop.

However, it’s doubtful that this is in-engine footage as it takes place in front of a highly-stylised background.

The game seems to be very early in the development process, as Ubisoft didn’t reveal many details beyond the location.

Vice president and executive producer of the Assassin’s Creed series, Marc-Alexis Côté, revealed that he knows fans have been eager for a game set in Japan.

In the broadcast, he said: “Red [is] our next premium flagship title and the future of our open-world RPG Assassin’s Creed games.

“It will let players explore one of their most awaited settings ever in the franchise, feudal Japan, and to live a very powerful Shinobi fantasy.”

Games such as Ghost of Tsushima and Sekiro have increased player’s interest in games set in ancient Japanese settings.

During the event, three more Assassin’s Creed games were shown off.

One is an open-world mobile game set in ancient China, called Project Jade.

Who is exempt from wearing a face mask on public transport?