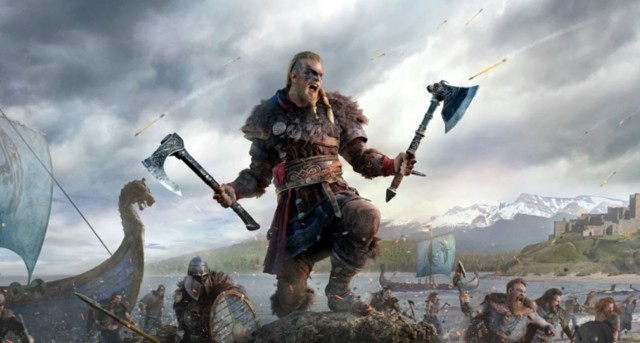 THE next entry to the hit Assassin’s Creed series is mere weeks away – and we’ve got all you need to know about the blockbuster game.

Assassin’s Creed Valhalla follows the journey of a Viking raider in the 9th Century, and promises to be one of the biggest titles of the year.

Assassin’s Creed Valhalla – what is it?

You play as a Viking who takes part in brutal raids on English towns and villages during the 9th Century.

According to game maker Ubisoft, gameplay will be “visceral and brutal” to reflect the violence of the raids in the real world.

“Fight brutal battles, lead fiery raids or use strategy and alliances with other leaders to bring victory,” the French firm writes on its website.

“Every choice you make in combat and conversation is another step on the path to greatness.” When is the Assassin’s Creed Valhalla release date and price?

Assassin’s Creed Valhalla will be released on November 10 on Xbox One, PS4 and PC.

It’ll also launch on the next-gen consoles when those hit shelves later that month.

As a reminder, that’s November 10 for the Xbox Series X and S, and November 12 or 19 for the PS5 and PS5 Digital Edition depending on your region.

Helpfully, if you buy the Valhalla on a current-gen console and then upgrade to a next-gen one, Ubisoft will upgrade your game to a PS5 or Xbox Series X/S one for free.

There are multiple versions of Assassin’s Creed Valhalla at a range of price points.

The standard, plain-old-disc will set you back £50/$60, while a Gold Edition with extra missions and lands to explore will cost £84/$100.

Moving up, you can add an extra set of character items with the Ultimate Edition. That’s priced at £100/$120.

Finally, the £180/$200 Collectors Edition adds a treasure trove of collectors items, including a collector’s case with unique artwork and a Viking Statuette of Eivor with his raven and axe.

Gameplay will be visceral and brutal to reflect the violence of the raids in the real world, according to Ubisoft

Like previous games in the franchise, the new Assassin’s Creed Valhalla will be partly inspired by real-world history.

Players take control of Eivor, a Viking raider raised to be a fearless warrior.

Rather than being entirely set in the Viking homeland of Norway, the game will take place in England in large parts.

Historically, England was a popular nation to raid due to its close proximity – a short hop across the ocean.

Eivor must lead his clan of battle-hardened warriors from icy desolation in Norway to a new home amid the lush farmlands England.

“Driven from Norway by endless wars and dwindling resources in the ninth century AD, players will lead Eivor’s clan of Norsemen across the icy North Sea to the rich lands of England’s broken kingdoms,” Ubisoft explained.

“As the Vikings begin to settle in their new home, they encounter resistance from the Saxons including King Aelfred of Wessex, who denounces them as heathens and looks to be the sole ruler of a civilised England.

“Against all odds, Eivor must do what is necessary to keep Valhalla within reach.”

Players will battle it out with the Anglo-Saxons of England

Assassin’s Creed Valhalla gameplay – what do players do?

Players are tasked with carving out a “new future” for their clan.

This will involve using a Viking style that makes use of a revamped combat system.

Ubisoft promises the ability to dual-wield weapons against “a greater variety of enemies than ever before”.

And players will also be able to lead raids to select locations to gain resources.

This means players will be able to steer longships up and down the coast, attacking villages to acquire riches.

In other news, Sony recently confirmed that more PS5 pre-orders are on the way.

The next-gen machine sold out within minutes when pre-orders launched on September 17.

And, a PlayStation fan has created an “all black” PS5 that disappointed gamers think looks much better than the real thing.

Chadwick Boseman filmed several movies during chemotherapy and between ‘countless surgeries’ prior to his...

The Queen is hiring a florist and youll get paid 24k to travel to...