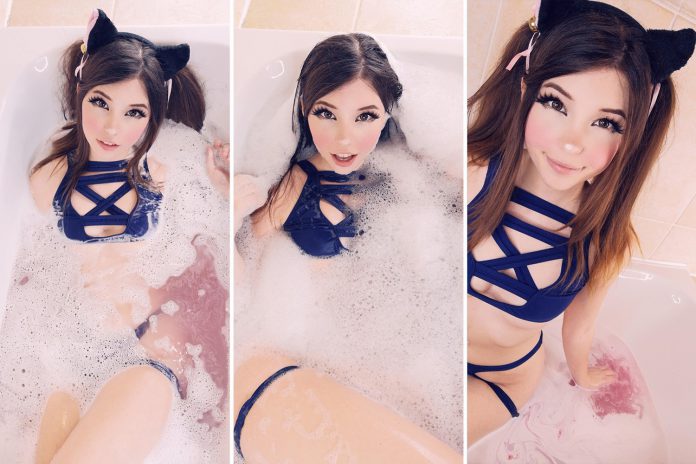 She was “brought up by the Internet” and started posting fashion and make-up content on Facebook from the age of 14, but only really hit the big time when she joined “the more risqu” side of the industry, as she puts it, late last year.

If you want to see more salacious content, you have to go elsewhere, namely to crowdfunding site Patreon, where she interacts directly with fans who pay a monthly fee for the privilege.

The higher the fee, the “more of an intimate and personal connection” you’ll get.

Pay 40 a month, for instance, and you’ll get access to Belle’s personal Snapchat, which she describes as her “naughtiest” social media.

It also goes deeper than that, with fans getting to direct the action.

“I do everything from bath/showers to interactive choice based date nights,” she reveals,

“I give options and people get to vote on what they want to see – from what I wear, to where I go, to what I do.”

“Talking, custom photo sets and other unique requests they may have” are also catered for, she says.

That is where things can start to get very expensive, though.

If you want a custom photo set tailored to your requests, you’ll need around 800 to sign up for a ‘King’ level subscription.

Some of these requests can get a little weird. Alongside the expected requests for pictures featuring feet, she’s had others looking for financial domination, humiliation or even used pants.

Even stranger are the times she was asked for a jar of pee, create a photo set where she was playing dead, or send a video of herself sneezing.

“Sometimes you get cute ones,” though, she says.

“Once someone just wanted a Polaroid picture of me enjoying a pizza in a hoodie.”

The chance “to build up personal relationships” is part of the job she enjoys, and even claims that some of her subscribers “have become my genuine friends.”

Outside of fulfilling those special requests, “its a great job for letting your creativity run wild,” she says.

“One day Ill be filming myself eating eggs, and then playing with an octopus, and the next day Ill be selling my bath water.”

The job is fun because of that variety, and because it gives her an excuse to indulge her love of clothes.

Belle ended up here after spotting an opportunity after a few years using social media to create fashion content.

“Before I started my Instagram, I really just sat inside and messed around with arts and crafts, made things and drew,” she told Sun Online.

She says she never really “gelled” with normal jobs, having tried working in her village coffee shop and making some money handing out leaflets for babysitting.

“When Instagram did happen, everything went from 0 to 100 really fast,” she reveals.

“Ive always been quite shy and little socially awkward,” she says, and posting fashion pictures on Facebook was an outlet for her creativity.

“When the whole Japanese craze started online, I got really involved and that turned into more anime and gaming style,” she says.

Making the switch in September last year, Belle quickly carved out a niche as a self-identified gamer girl, with risque Japanese, gaming and anime-inspired posts.

At the start she was working 16 hour days, seven days a week, trying to gain followers and get attention.

“I dont mind putting in many extra hours because it really feels like self-investment,” Belle says, revealing she still works 10 hour days “without a holiday in sight.”

That hard work does seem to be paying off, though.

Since then she has been able to move out, get her own place, and focus “on setting up a future for myself.”

“Being your own boss really is a great feeling,” she explains, despite “the stress of everything being on your shoulders.”

She recently shot into wider consciousness with a stunt where she sold jars of her bath water for 24 a time.

The was inspired by a “running joke” among the gaming community in Instagram, she says, with “Ill drink your bathwater” becoming a byword for desperation.

Belle reveals that as she saw it keep appearing in the comments alongside her photos and videos, and suddenly inspiration hit.

“As I was going to sleep I was thinking of the next weirdest thing I could do, and I thought that its staring me right in the face,” she reveals.

“Ill actually just give people what theyve been asking for… and it worked!”

It all sold out within 48 hours of her online store launching.

Weirdness has been something she has embraced from the start because she seems to love little more than provoking a reaction.

“I have a diary next to my bed that I jot things down in as soon as I think of them,” she says, revealing she’s got another 10 ideas up her sleeve to keep fans on their toes.
“Im constantly trying to top my weirdness and wait for the perfect opportunity,” Belle says.

Fans still get demanding, though.

She gets annoyed because “a lot of people think that just because that my content is sexual that I should do whatever they want.”

Having a thick skin is useful given how provocative she likes to be.

She was “really yes and no about it”, she says, before explaining the trolls eventually pushed her over the edge.

It was simply “too much of a good opportunity to annoy them back,” and that was that.

Her stunts do divide opinion, with the recent bath water sale being a typical example.

She won lots of praise online for the scheme, being praised for canny marketing, and a keen understanding of the audience.

Women in particular seemed in awe of the level of chutzpah required to attempt something so patently ridiculous, only to see it pay off in a big way.

Others are less impressed, writing her off as a troll, launching into personal attacks, or even accusing the diminutive 19-year-old of “exploiting” men for profit.

She doesn’t take the hate to heart, though, suggesting that only 20 per cent is actually serious.

“People love over-reacting to things for the joke of it and so do I,” she says.

“Being brought up on the internet you really understand the concept of trolls, and it becomes easy after a while.”

There are also others who accuse her Belle of stepping over the line with her business.

Balle didn’t have any comment to make on accusations she has passed off other people’s work as her own, or distributed pictures of other sex workers without their consent.

Either way, it is very hard to argue that what she’s doing isn’t working as the follower numbers keep climbing and new patrons keep subscribing.

While the job is fun for now, she says, Belle is already looking to the time where she can move on from it.

“Hopefully there will be a day when I can just focus on some of the other things I love doing,” she says.

“I havent had too much time to be just Belle.”

EastEnders icon & Alzheimers sufferer Barbara Windsor says I used to work behind that...

Coronation Street’s Sean Wilson is unrecognisable 16 years after Dancing on Ice and quitting...