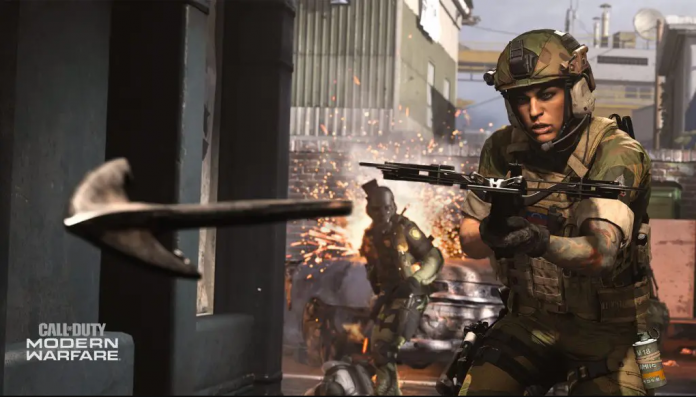 CALL OF DUTY nuts will get their hands on a brand new weapon this week and it kills enemies in one hit.

The crossbow is one of several updates coming to the hit shooter on Wednesday, game-maker Activision revealed in a now-deleted blog post.

The crossbow is a new one-hit-kill weapon coming to Call of Duty: Modern Warfare this week

Activision said the update would roll out this week but did not give a specific release date, reports gaming site CharlieIntel.

We’ve got all the details below.

The crossbow is a new weapon that kills your foes with one shot.

“This super-sleek one-hit kill weapon is available to earn and add to your Modern Warfare arsenal.”

To find the weapon, visit the Marksman Rifles tab in the Loadout menu.

“Youll have to complete a marksman rifle related to challenge in order to earn this bad bolt of a weapon,” Activision said.

Gamers can also expect a spruce up of CoD’s multiplayer playlist system.

For a start, map Aniyah Palace returns to Ground War.

“Jump in to play this Ground War experience on January 22.”

The following modes will be replaced from Modern Warfare’s featured playlist:

That’s not to say they’ll disappear from the game forever. We may still see them elsewhere in future.

‘All the fixes’ patch

Fans may have to wait a little longer for a patch that will bring what developers describe as “all the fixes” to the game.

Gamers have complained since the game’s launch about a number of glitches that the team are yet to address.

Earlier this month, Joe Cecot, co-design director of multiplayer at Infinity Ward, wrote on Twitter : [The patch] should launch in January. Dont have an exact date.”

He continued: “Our next big update should have all of the fixes. We start pushing this update through this week. I dont have the exact date. Sorry.

While we don’t know when the fix will be coming, we do know what will be resolved.

Activision has marked the following issues as “fixed in a future update”.

A recent “price leak” suggests thatthe PS5 could cost 250 more than its predecessor.

And we reveal thebest PS5 gamesyou can expect to play next year.

What do you think of the new CoD weapon? Let us know in the comments!

Eat Out to Help Out postcode checker – where are the restaurants near me...

Prince William and Kate Middleton have a ‘secret’ third home & it was a...