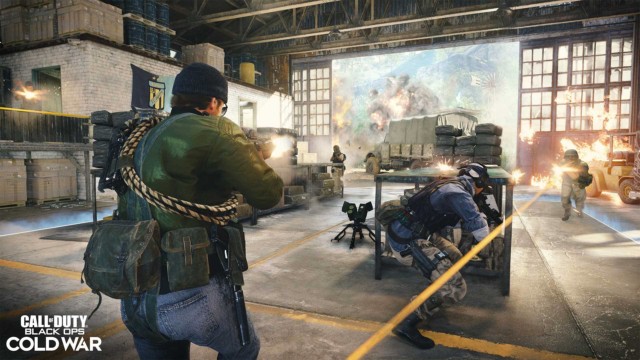 CALL of Duty is back with a brand new entry to the franchise – Black Ops: Cold War.

First for the housekeeping: this is a beta, so things can and will change before final release.

But so far, so good.

There’s half a dozen maps and twice as many modes to enjoy, so I’ve had plenty to chew over.

In terms of core Multiplayer maps, my favourite is probably Miami or Moscow. They’re both colourful, rich and feel very Cold War era, and there’s a good balance and pacing across game modes.

I’ve been playing a max settings in 4K with a Dell Alienware PC and it looks fantastic – especially the big, snowy maps.

Satellite is a great map if you’re into sniping, but it’s very open – which means aerial scorestreaks are particularly powerful.

But it’s got a great sand dune segment that adds a fun duck-and-dodge element to matches.

The usual modes are back: Team Deathmatch, Domination, Hardpoint.

This time there are some fun additions, however.

Combined Arms modes are set up for 12v12, and take place on bigger maps – including the giant ship battle seen in the trailers.

It’s fun and action-packed, with each map perfectly sized to make sure you don’t go too long without conflict.

VIP Escort is another thrilling entry: it’s like Search & Destroy, but with a human bomb.

The VIP is randomly selected on your team each round, and you have to help them get to an exfil location.

There’s plenty of strategy, and a good thrill in abandoning your team as the VIP to sneak behind enemy lines and escape unnoticed.

But it’s disappointing that the enemy team is warned when you start your exfil.

More fun would be if you could silently board the chopper – recapturing the fun of a ninja-plant in Search & Destroy. It’s a bit like Warzone, with teams dropping in from an airplane, collecting loot and working in squads.

But it’s capped at 40 players, split into 10 four-person teams.

You have to work to collect uranium from around the map, fill up dirty bombs, and then detonate them.

The team that racks up the most points by doing this wins.

It’s loads of fun, and more fast-paced than Warzone – much more akin to typical Multiplayer.

But the strategy and the scale of the game is very Warzone-like, and it’s sure to be a smash-hit.

Perhaps the only problem is that it sometimes feels a little too fast: players respawn quickly and can choose to land anywhere.

So trying to plant a bomb even when you’ve cleared the area can be difficult, because it can be overrun so quickly once again.

Still, it makes you think on your feet, strategise, and assign jobs: planters, defenders, distractions and so on.

It’s probably not one to try as a solo player unless you’re feeling brave.

I’ve tended towards using the M16, which feels a lot like the Call of Duty 4 version. It feels great and very capable.

Sniping is also snappy and powerful, and the large maps make it tempted to always keep a sniper on hand.

Perhaps the only niggle is that most of the weapons feel very weak without attachments.

But attachments are easy to earn, and they feel very formidable once on your gun – which is the point, really.

Some of the movement mechanics have changed.

Sliding is fast and takes you straight into a crouch – and crouching itself is very fast.

There’s an aim-down-sight delay if you hop into prone, making drop-shotting more difficult.

Who wants to play a game where everyone just falls to the floor every time they enter combat?

The combat is fast, but not excessively so. The maps feel fitting with the genre, and keep a good pace of play.

There’s a great variety of modes on offer, with player counts that will suit everyone.

And it’s exciting that there’s even more to come with the full game.

In other news, Activision has confirmed it will release a new Call of Duty game next month.

We recently spoke to one of Call of Duty Black Ops Cold War’s designers about the game’s multiplayer mode.

And, we recently spoke to Warzone’s creators about the future of the spin-off game.

Did you miss our previous article…
https://www.hellofaread.com/technology/huge-xbox-one-update-reveals-what-xbox-series-x-gamers-will-see-when-they-boot-the-console-up-for-the-first-time/

Schools will open in June at the earliest with primary kids first as millions...

EU will move to No Deal Brexit planning if there isn’t a breakthrough in...