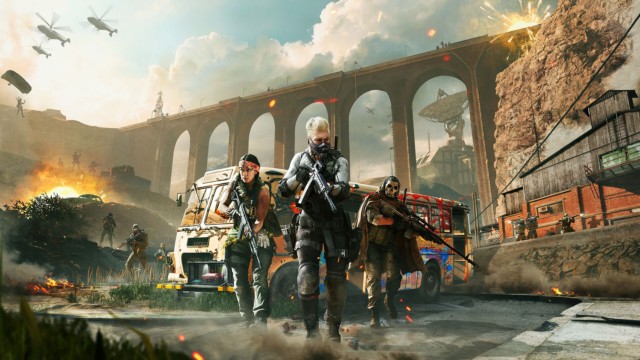 CALL of Duty has kicked hundreds of thousands of players to the curb as part of a months-long crackdown on toxic behaviour.

In a report released this week, publisher Activision detailed how it was stamping out hate speech and harassment on the first-person shooter.

More than 350,000 Call of Duty fans have been booted from battle royale mode Warzone

The big news is the banning of 350,000 accounts for “racist names or toxic behaviour” over the past 12 months.

The mass-blocking was driven by player-submitted reports and an extensive review of Call of Duty’s player-name database, Activision said.

“We are committed to delivering a fun gameplay experience for all of our players,” the company wrote in its report on Wednesday.

“There’s no place for toxic behaviour, hate speech or harassment of any kind in our games or our society.

“We are focused on making positive steps forward, and together celebrating the best fans in the world.”

The company said it had also implemented new technology to filter out potentially offensive text chat.

“There’s much more to be done, including increasing player reporting capabilities and moderation, as well as addressing voice chat to help combat toxicity,” Activision said.

“Our goal is to give players the tools needed to manage their own gameplay experience, combined with an enforcement approach that addresses hate speech, racism, sexism and harassment.”

The Call of Duty series is notorious for having one of the most toxic communities around.

Activision has begun to take proactive measures to combat rampant cheating, as well as the shocking abuse traded between players. It comes after a further 30,000 players were kicked off of Warzone by Call of Duty developer Raven Software earlier this month.

That took the total number of banned players to more than half a million, according to the US company.

It was part of a growing crackdown on Warzone cheaters, who cause chaos for legitimate gamers.

The situation is so bad at times that one pro gamer recently quit Call of Duty Warzone.

‘Gutted’ I’m A Celeb fans all have the same complaint about show’s final week...

Eve Sleep launches Winter sale: up to 35% off mattresses and bed frames

Cheeky lad, 16, steals a kiss from Meghan Markle during her school visit to...