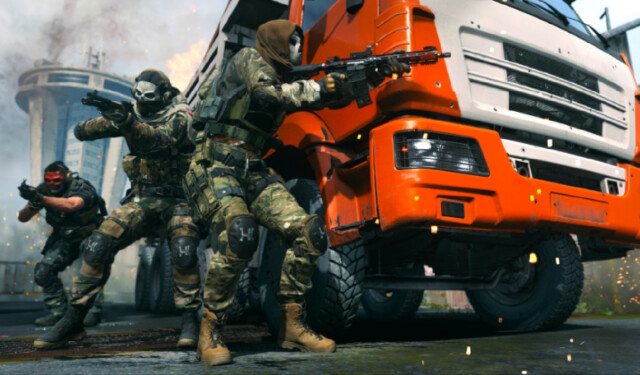 DIVING in to the Call of Duty Modern Warfare 2 beta this weekend? There are some tips you’ll want to know first.

We’ve got some quick-fire advice to get you ready for a weekend of virtual gun fun.

The first two days are only available to early access players on Xbox, Battle.net and Steam – as well as all PlayStation gamers.

You’ll be able to enjoy several game modes and maps, testing out new weapons, perks and killstreaks as you go.

To help you get started, Activision has shared the following tips and tricks with HOAR…

Let’s face it – Call of Duty – no matter the game – is always more enjoyable when playing with friends. Who wants to play with randoms?

No need for teammates who “act like bots”. If your friends are somewhat good, you’ll be smashing lobbies together!

Ask your friend if they are going to play the beta and if they want to play together.

You can all team up to play as the Iconic Task Force 141 together, tackling lobbies as they come.

This is the best way to start the beta weekend, easily. It’s like the tagline suggests, The Ultimate Weapon is Team.

You can then move onto playing around the objective, winning as a team. This is a sure-fire way to maximise XP in these opening stages of the game’s lifecycle.

Experiment With Every Weapon

No matter when or how you’re accessing the Open Beta, get ready: You’re able to earn the biggest collection of free Beta rewards ever in Call of Duty history!

A total of ten different reward items — including two Weapon Blueprints and an Operator Skin — can be earned throughout one or both Beta Weekends.

These items can be equipped in the Beta as soon as you unlock them, and they are only available to unlock during the Beta itself. Don’t miss out!

These special Beta rewards, available only if you earn them during the Open Beta, then become available at the launch of Modern Warfare II on October 28.

Imagine being one of the few to have the “Side Impact” weapon blueprint at launch – a very rare skin indeed.

To be the first to unlock these you’re going to need to level up fast. How? Experiment with every weapon.

There are various weapon challenges, camos etc up grabs in Modern Warfare II.

If you use one weapon constantly, your XP will slow down as you progress your weapon and get more kills with it.

The best way to rack up XP is to use as many weapons as you can.

The beta is separate from the later main game and you don’t have to worry about your statistics during the entire test.

Your kills, deaths, levels and whatever else goes with them do not affect your statistics in the finished game.

Break out of your usual CoD routine, play unfamiliar modes or try a different playstyle. You can still be normal after the release.

Spend Time in the Settings

If you’re like us, you just want to hop straight into the gameplay. As fun as this may-be, it’s not the smartest choice.

Settings have changed, your sensitivity may need tweaking or you may not be used to Modern Warfare Settings (if you’ve come from Black Ops Cold War for instance).

Before you rush into everything, take 15 minutes to walk through the settings and get familiar with your surroundings.

Did you miss our previous article…
https://hellofaread.com/technology/teen-arrested-in-what-is-believed-to-be-gamings-biggest-ever-hack/

Ministers were warned about risk of coronavirus last year and told to stockpile PPE,...

‘Wave of bankruptcies and job losses’ to come as 11million claim furlough & grants...

Pubs could be ordered to SHUT in Birmingham as lockdown rules tightened to stop...