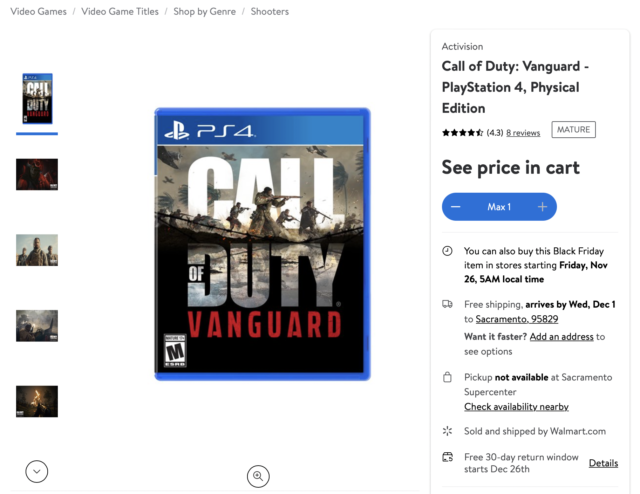 YOU can pick up Call of Duty Vanguard for well below the retail price.

The blockbuster shooter is now up for grabs on Xbox and PlayStation for just $39.

This is true for the Xbox One, Xbox Series X/S, PS4 and PS5 versions of the game.

It’s a major coup given that Call of Duty Vanguard usually retails for $69.99.

So you’re saving a whopping $30 on a game that’s only been out for a few weeks.

Better yet, you’ve still got around a week to use Vanguard to level your guns up on Warzone.

The new Warzone Pacific map is launching on December 2, and will introduce Vanguard’s weaponry.

The price listing doesn’t actually appear on the product pages.

Instead, Walmart says that you can “see price in cart” – the online shopping cart.

This sometimes happens when a retailer wants to sell a product for a very low price, typically below R.R.P.

It means they can go significantly below the recommended price without “advertising” it as such.

You’re limited to buying a single copy of each product, likely to stop wholesalers scooping the title up for such a low price.

HOAR awarded Call of Duty Vanguard a 5/5 score in our review, praising the fast-paced and cinematic Campaign and the compelling Multiplayer.

That’s a tried-and-tested theatre of war for the Call of Duty series, so Sledgehammer Games risked treading overly familiar ground.

Thankfully the story is freshened somewhat by focusing on the birth of the special forces in WW2.

This lets you view key parts of the war from a slightly different perspective – and makes you feel very important. For a Campaign that’s edging ever closer to movie territory, that’s key.

It also means we get to spend time across all the major conflict fronts, including North Africa, the Pacific, and the Western and Eastern fronts.

It follows four Operators, all inspired by real people.

In other news, read our iPhone 13 review.

Take a look at our Call of Duty Vanguard review.

Here’s an explainer to try: What is the metaverse?

And here are the hidden WhatsApp codes you need to know.