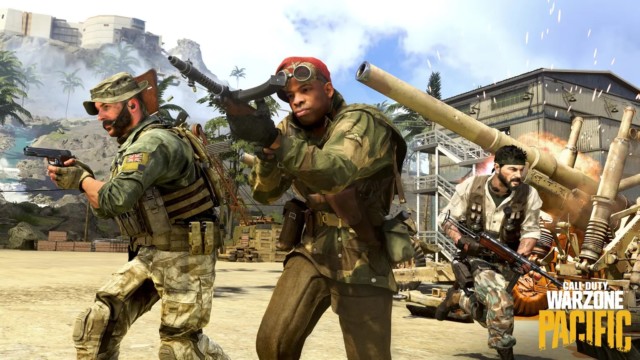 CALL of Duty is going back in time for its next instalment which is out this week – and here’s everything you need to know.

Vanguard is the upcoming entry in the Call of Duty series and is bringing all sorts of new features to the franchise. Activision lays out the road to Season 1

Call of Duty: Vanguard launches this Friday, November 5 across all platforms.

If you pre-order, you can pre-load the game and start playing on November 4 according to one tipster. The times for North America are listed below:

Pre-loads started on October 28 for console players, so if you’ve pre-ordered digitally, you can pre-load right now.

Call of Duty games are notoriously large when it comes to file size, causing quite the problem for console players with small hard drives.

However, Vanguard’s install launch size is going to be slimmed down by 30% to 50% compared to previous instalments in the series. Although that only goes for PC, PS5, and Xbox Series X|S.

Activision has listed the approximate file sizes for install, pre-load, and space needed to play the game so you can start making room or invest in a new SSD now.

Call of Duty is leaning into a diverse cast of characters this year, which is refreshing.

We’re going back to WWII but the focus is on the origins of Task Force One – dubbed “the original Special Forces”.

Sledgehammer is no stranger to the setting, having developed 2017’s Call of Duty: WWII, so the studio is more than equipped to take the reins.

Things will be quite a bit different this time around though as the story follows a handful of heroes across four major fronts.

The campaign will let you “live out the moments that made them heroes and learn how they came together to spearhead Task Force One.”

Your first mission in the game starts off with a newly recruited Operator (that’s you) infiltrating a “heavily fortified U-boat facility”.

Once you’re in, you need to procure Axis military intelligence on the project before it’s smuggled out of Germany.

We’ve had a pretty extensive look at the online portion of the game, with the Vanguard multiplayer reveal offering up quite the trove of information.

At launch, Vanguard will offer the following seven core and hardcore modes:

Additional modes will be added post-launch, “including two newer ones that recently became a competitive standard and a small-team tactical mainstay, according to the blog.

There’ll be 16 multiplayer maps at launch which support these modes, with three more maps post-launch on December 2. These are the confirmed maps so far:

A new Combat Pacing system system switched up the multiplayer experience even more. You can opt for Quick Play to get a taste of everything, or pick the one that suits you best:

Tactical offers the usual pacing CoD fans will be familiar with. Assault is “balanced” and gives players “room to breathe and a lot of targets to kill.”

Blitz is described as “high-action” at “frenetic levels” so feel free to dabble in all three to find your favourite.

Operator-wise, Vanguard will launch with 12, including the four from the campaign:

The Operators are spread over four Task Forces, and each one is hugely customisable:

Treyarch is heading up Call of Duty: Vanguard’s Zombies and in the spirit of full integration, we’re getting a crossover with the Dark Aether storyline from Black Ops Cold War.

Set against the backdrop of WWII, the Special Forces operatives are stuck in Stalingrad and cut off from help thanks to the dark magic of Kortifex the Deathless.

Anchored to artifacts, there are five Dark Aether entities in total:

Unfortunately for Kortifex, the other four are rising against him.

With their help, as well as demonologist Professor Gabriel Krafft, the containment spell can be broken and the zombie apocalypse prevented.

The new Caldera map drops at the beginning of Season 1 on December 3, or December 2 if you own Vanguard.

Warzone itself is getting renamed ‘Warzone Pacific’ and we’ll see a dedicated playlist in Vanguard Royale.

Vanguard Plunder mode will drop soon after, and there’s all sorts of vehicles to play with across both modes.

But that doesn’t mean the ones you’ve accumulated prior are being phased out. All of the original Warzone vehicles and skins aren’t going anywhere.

All of the Operators and Calling Cards from Black Ops Cold War and Modern Warfare will be available, as well as cross-progression and Seasonal Prestige.

If you’re playing Call of Duty: Vanguard on PS4 or PS5, there’s some free, exclusive content headed your way.

PlayStation players who purchase the Battle Pass Bundle get a bonus five Tier Skips on top of the 20 that the bundle offers as default.

There’s also seasonal combat packs, with the first one including a new Operator skin, Weapon Blueprint, and more.

Partying up with other PlayStation players will net you even more rewards. Party members get +25% bonus weapon XP.

Monthly double XP events running for 24 hours, and an additional two loadout slots are also being made available for players on the platform.

*”Hi-Rez Assets Cache is optional disk space that can be used to stream high resolution assets. That option can be turned off in the game’s settings.“

Three jumbo jets loaded with PS5s land at Heathrow as Sony races to restock shelves in time for Christmas.

Fortnite to block millions of players forever from November 15 after rule change.