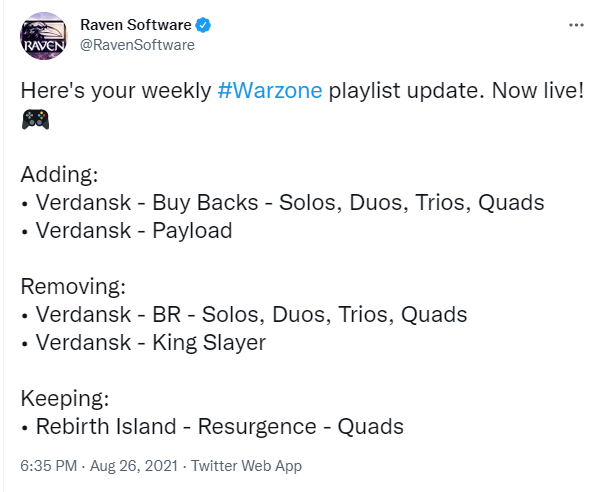 CALL of Duty Warzone players have logged on to find the usual battle royale modes missing from the menu.

Raven Software gave players the heads up over on Twitter, detailing what has been added and removed for the weekly Warzone playlist.

The BR mode helped catapult Warzone to its current level of popularity, and was created as a response to the stellar rise of Fortnite’s BR mode.

When the Warzone weekly playlist update rolls out, BR is usually a firm fixture that’s still available to play.

But this week, BR Solos, Duos, Trios, and Quads have been scratched to make way for Buy Back.

Buy Back is normally a limited time mode, but this time around it’s replaced BR outright.

A number of disgruntled CoD players have taken to Twitter to vent their frustrations with the usual level of reasonability we’ve come to expect from the internet.

Some users are even speculating that Activision and the devs are trying to funnel people into playing the Call of Duty: Vanguard alpha this weekend.

Of course, the Vanguard alpha is only for PS5 and PS4 players, and no pre-order or PS Plus subscription is required.

The good news is that Buy Back is probably only hanging around for one week, and the core BR playlist is returning on Thursday, September 2.

Of course, with the negative reception this has received ahead of the weekend, Raven may be inclined to return the BR playlist before then.

The studio has outlined its plan for weekly playlists in the Warzone Season 5 patch notes.

Buy Back is in there for this week, but the removal of the standard BR isn’t mentioned so it’s understandable that players were taken by surprise.

If you’re bummed out from the news, sit tight for a week and keep your fingers crossed that Raven takes pity on you and brings Br back early.

If you’re on PlayStation, you can avoid all of the BR drama and check out the Call of Duty: Vanguard alpha this weekend instead.

And if you’re looking to get into the Vanguard beta, check out when it opens up to your gaming platform of choice.

Meanwhile, Fortnite players should check out the March Through Time MLK experience for something a little bit different.

Did you miss our previous article…
https://www.hellofaread.com/technology/warhammer-40000-chaos-gate-daemonhunters-cinematic-trailer-looks-devilishly-good/

Fresh claim that Priti Patel ‘threw a folder’ at official during row as Boris...

Tell-all Meghan Markle biography set to be written by the man who dubbed Prince...

Dr Alex George says working in A&E amid coronavirus is like preparing for battle...