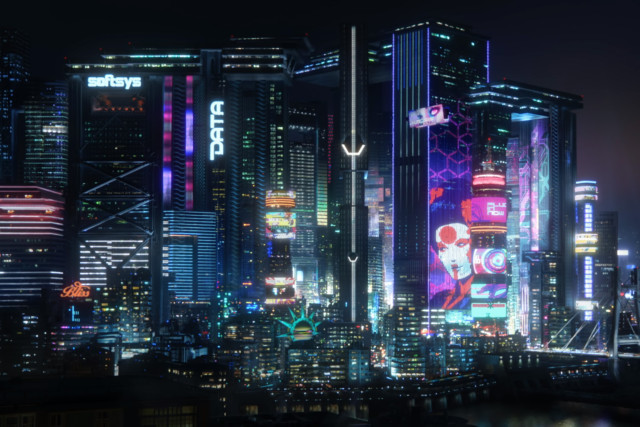 CYBERPUNK 2077 is a huge futuristic role-playing game that’s going to feature a huge world of branching choices… and Keanu Reeves.

Here you’ll find all the latest Cyberpunk 2077 release date rumours about the game, as well as news, trailers, images, story details and more.

Night City is a metropolis covering much of California Cyberpunk 2077’s world is a near-future version of California

Cyberpunk 2077 is an upcoming RPG video game developed by CD Projekt Red – the creator of the acclaimed The Witcher series.

But instead of a fantasy setting, the new game is based in a dystopian sci-fi world where humans are part-machine.

You play as V, who you can customise throughout the game.

Male and female voices are available, and you get to choose your own background too.

Your choice of background will impact your in-game choices too – you’ll have different options open to you in conversation for each origin story.

V will fight their way through the game in one way or another, but exactly how is up to you.

If you want to focus on super-strength and weapon skills you can approach problems head on and slice your enemies into bloody chunks – but you’ll also have the option of being a stealth specialist or a hacker.

It will, we are told, entirely possible to complete the game’s main story without killing a single person if you focus on the right skills. Cyberpunk 2077 release date – when is it out and can I pre-order it?

You can ever pre-order it already, with the £250 limited edition exclusive in the UK to Game stores, assuming they survive until April 2020.

The PC version is going to feature next-gen ray-tracing technology that console gamers won’t be able to get until the PlayStation 5 and the Project Scarlett Xboxes arrive in late 2020.

So don’t be shocked if the game is re-released on PS5 and Xbox 2 – bear in mind CDPR are still bringing 2015’s Witcher 3 is still to new platforms five years after its original release. Keanu appeared during Microsoft’s E3 briefing to reveal he was taking on a role in the game.

He will be playing Johnny Silverhand, a “legendary rockerboy” who is a “key character” in the game. Keanu’s appearance adds to the hype surrounding Cyberpunk, which is being made by the team behind The Witcher series

The extended gameplay demo shown behind closed doors at E3 showed that his character is a digital ghost, haunting the player thanks to a chip implanted in their head.

That chip is some sort of cybergrail, as it seems to give the player the ability to survive experiences that would kill anyone else and could hold the key to immortality.

The latest trailer for the game, featuring the Matrix star, sees his character invite the player to burn Night City, where the game’s action takes place, to the ground.

He appeared during Microsoft’s briefing before the show kicks off, where the firm revealed its next console would be out in time for Christmas next year.

As well as lending his voice and likeness to the game, developers CD Projekt Red revealed he also provided full-body motion capture for the role to boot.

The star is no stranger to animation, as he recently appeared as Duke Kaboom in Toy Story 4. His Messianic appearance caused the crowd to lose their collective mind

What else is there to know?

The developer released its full 2018 demo last summer, to give you a flavour of the game:

The game doesn’t look to have changed that much since that demo, though the announcement of RTX support on PC will give it a significant graphical upgrade from what you can see there.

Is there going to be a beta I can play?

There are currently “no plans” for an open or closed beta, according to the developers.

Given the single-player focus of the title this makes sense, as there should be no scale or network issues that would benefit from mass public testing.

While the game has plenty of guns, and you’ll definitely get shot at, you’ll always have the option of solving problems non-lethally

For more, watch the gameplay demo above to see the weapons, cover, vehicle systems and more in action.

What would you like to see from Cyberpunk 2077? Let us know in the comments!

I’m an interiors expert – here’s what Harry & Meghan’s home says about them...

Chancellor Sajid Javid promises to cut taxes on wages in every Budget he delivers...