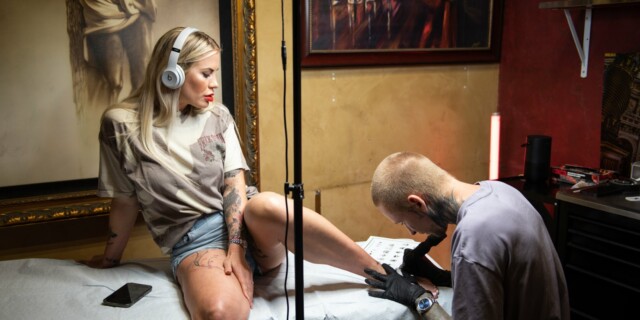 DIABLO 4 developer Blizzard has announced Diablo Hell’s Ink, pop-up shops which offer Diablo 4 keys to those who get a tattoo based on the game.

The tour will take place across the globe beginning in Los Angeles, U.S.A and ending in Sydney, Australia.

A woman gets her flash tattoo in LA.

Places have already been reserved by many who won a free large-scale design by submitting their favourite Diablo memories.

However, it is possible for anyone to earn a free Diablo tattoo.

Anyone who lines up at the stores will have the chance to get inked by the headline artists on a first come, first served basis.

These tattoos are called ‘Flash’ tattoos and are small symbols or logos from the game.

The tour has already begun with the first fans to get their tattoos coming to the store in LA.

In a few days it will make its second stop in Chicago to deliver more beta access codes and free life-long skin art.

The final stop in July will be in New York on the 30th.

August sees three more stops on the world tour – Miami on the 6th, London on the 13th, and Berlin on the 18th.

The team will then zip over to the other side of the world for two September stops in Australia.

The people of Melbourne will be the first to try on the 3rd, before the tour ends in Sydney on the 10th.

As the tour has concluded its first stop, the first pictures of people’s body art has been revealed.

Getting a tattoo will earn you a business card with a code for Diablo 4 beta access on it.

The other side reads:

“Thank you for offering your flesh as tribute.

“You have been gifted early access to an upcoming beta for Diablo 4 and a digital copy of the game upon release.”

Diablo 4 is currently scheduled for a 2023 release with no specific date given.

One of the larger Diablo designs

Did you miss our previous article…
https://hellofaread.com/technology/eso-patch-notes-5-biggest-changes-in-update-1-28-2/

Schools pushing parents to decide TODAY whether they plan to send their kids back...