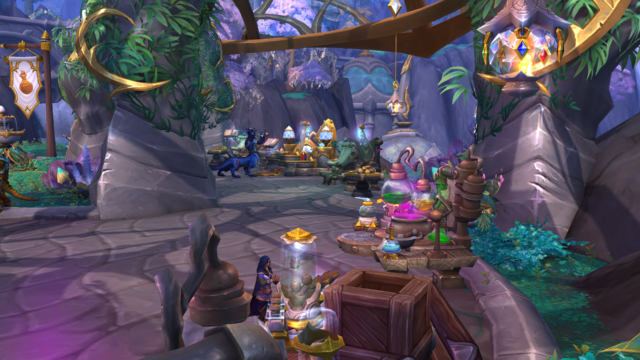 WORLD of Warcraft’s latest major update, Dragonflight, releases on November 28, and fans are excited to see how the game will change.

Dragons will be introduced to the game as playable characters for the first time, while other changes to classes hope to shake up WoW’s online competitive play.

Big changes are coming in the Dragonflight expansion.

In the competitive scene, a combination of three types of player has long dominated.

Since the last major update in 2020, called Shadowlands, most players on the competitive scene have stuck to a trio of a Rogue, Mage and a Priest known as RMP.

The synergy between these three classes is particularly powerful, and has led players to use not much else online.

There has been a lot of disappointment surrounding this from fans.

Those who want to play as one of WoW’s many other classes, have felt the need to main one of these types in order to play online.

However, in an interview with GLHF developers on Dragonflight acknowledged this issue, and spoke of the ways they hope the latest update can change the metagame.

Lead combat systems designer, Brian Holinka, explained to us the changes his team is making to the meta.

He says: “RMP is, and has been, a very strong composition with a lot of synergies, simply by virtue of what Rogues and Mages have going on between them.

“I still hear calls from players for us to re-add Deep Freeze to Mages.”

However, Holinka has decided to not make changes that would decrease the power of RMP, but rather improve the power of other classes and combinations.

He continues: “What we’ve done is we’ve looked at what team compositions should be countering RMP, and what are the ways we can enable those classes to do that more effectively.

“There’s often a focus from the player base for us to ‘nerf this, nerf that’ and while that is one way to fix a problem, it’s not always the best way.

“Instead, we want to examine the question of ‘Why are these supposed counters not actually countering?’

“Sometimes we do arrive at the conclusion that a nerf is required, but more often than not we’d rather build up the counters, and bring up the other classes to that level instead.”

Holinka does accept that the changes his team have made might not work out as planned once the expansion launches.

He explains: “As always though, the meta changes in PvP often, and it’s very tricky for us to predict what top players will do.

“That’s why we’ve added Rated Solo Shuffle as an option for players that want to push for higher ratings by themselves since it’s less reliant on team composition and more reliant on how well you can play your individual classes.

“We will be examining how team comp strength pans out and in future content updates do a big pass to shake up the meta and balance things out as best as we can.”

It seems that RMP will continue to dominate for now, but that other classes may take the top spot once Dragonflight launches.

Amanda Holden stuns fans as she strips off to a tiny red bikini for...

Downing Street plans for Boris Johnson to be absent for several weeks as he...

Love Island Australia fans are gutted after Kim is axed from the villa as...