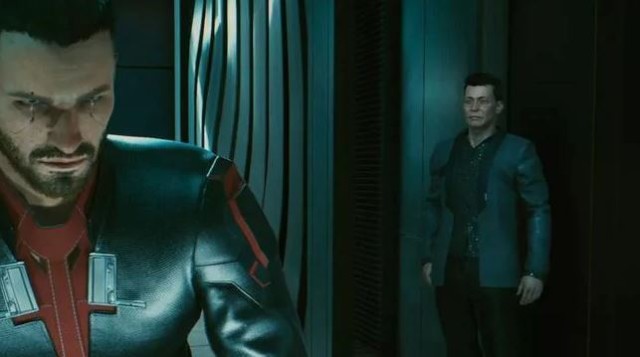 BILLIONAIRE Elon Musk stars alongside his girlfriend Grimes in a violent video game out this week.

Screen grabs captured from within Cyberpunk 2077 have revealed that a likeness of the Tesla founder appears during a scene in a toilet.

According to US tech news site CNET, which got an early copy of the sci-fi shooter, players witness the cameo during one of the game’s first scenes.

Your character, V, is vomiting into a bathroom sink at a big corporation’s HQ when a nameless suit walks in.

“At first the cyberware on the fellow’s face disguises his Muskness a little,” CNET wrote on Monday.

“But as he turns to the side and you see his profile he becomes unmistakably Musk.” Musk, 49, sparked rumours that he would make a cameo in the big-budget title, developed by Polish outfit CD Projekt, in a tweet sent last year.

“See you in 2077,” the tech mogul wrote alongside a wink emoji shortly after unveiling his Tesla cybertruck.

The futuristic Sci-Fi shooter, which also features the voice and likeness of Matrix star Keanu Reeves, hits shelves on Thursday. Musk’s girlfriend Grimes is another A-list cast member. In a nod to her career in the real world, she voices cybernetic pop star Lizzy Wizzy.

When players boot up Cyberpunk for the first time, they’re asked to select one of three back stories for their character.

You can make V a nomad, streetkid or corpo. Your choice affects the opening scene and dialogue options available to you throughout the game.

According to CNET, Musk makes his appearance early on if you select the corpo storyline. Cyberpunk 2077 is out worldwide on December 10

The tech mogul’s cameo makes a lot of sense, given girlfriend Grimes was confirmed as a cast member last year.

The pair have been dating since 2018 and earlier this year welcomed their first child.

Grimes, 32, a Canadian singer – whose real name is Claire Boucher – took to Twitter in May to confirm that the name of the child would be “X Æ A-12”.

She tweeted: “X, the unknown variable. Æ, my elven spelling of Ai (love &/or Artificial intelligence).

“A-12 = precursor to SR-17 (our favorite aircraft). No weapons, no defenses, just speed. Great in battle, but non-violent + (A=Archangel, my favorite song).”

Alongside Musk’s work in artificial intelligence with Tesla, the couple have plenty of geeky credentials, including a mutual love of anime.

It’s no surprise, then, to see them turn up in the year’s biggest video game.

Cyberpunk 2077 is a role-playing action game set in a dystopian Sci-Fi world where humans are part machine. You play as V, who you can customise throughout the game with new cyborg implants and augmentations.

Keanu Reeves, 56, plays Johnny Silverhand, a “legendary rockerboy” who is a key character in the game.

The RPG will be out on Xbox One, PS4, PC and Google Stadia, as well as the new consoles from Microsoft and Sony: The PS5 and Xbox Series X.

In other news, check out our review of the iPhone 12 Mini.

Are you excited for Cyberpunk 2077? If so, let us know in the comments!