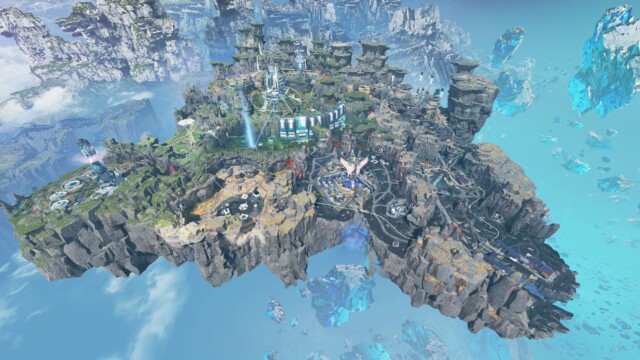 CATALYST is Apex Legends’ upcoming hero, and with her a new map is being released called Broken Moon.

Details about Catalyst won’t be revealed until closer to her launch, but details about the latest map are out now.

Our first look at Broken Moon.

The official blurb of the latest map states: “Broken Moon is a terraforming project commissioned by the Cleo Recovery Council.

“[This is] as a result of the catastrophic meteor impact that occurred in 2708.

“With the help of the Boreas Science Division, the moon became a habitable environment by 2715.

To further fund colonisation, the government entered into a contract with the Syndicate to bring the Apex Games to the moon.”

That’s right, Apex Legends is going to the moon, with a whole new take on how the game plays.

Broken Moon will be a similar size to World’s Edge. Respawn claims it took lessons from Stormpoint and reduced the number of uphill battles.

Not only is the map one of the smaller ones on offer, but zip lines will help Legends move around more easily.

Players can attach to one for a quick escape, fast rotation, or risky push from one area to the next.

From the zip line, Legends will still be able to shoot their weapon and throw grenades, but everything will move much faster.

The places of interest (POIs) are much larger than usual — with some twice the size of those on other maps.

Did you miss our previous article…
https://hellofaread.com/technology/the-devil-in-me-preview-an-interactive-tale-of-true-crime/

Jesy Nelson strips to her bra for another sexy snap after split from Chris...

I’m A Celebrity on 15mins earlier tonight – as huge name is booted out...