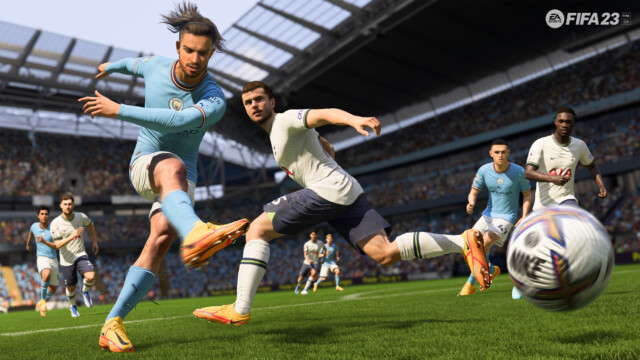 IN a press presentation, EA Sports has shared the key points we can expect in FIFA 23, and unlocked an early build for us to start playing.

Now we’ve solved the cover mystery – Kylian Mbappé will be the only cover star on the international Standard Edition, while Australia and Chelsea F.C. Women’s Sam Kerr will join him on the Ultimate Edition – it’s time for the pitch to do the talking.

FIFA 23 aims to be the “perfect” version of how EA Sports sees football.

The presentation started with a video celebrating the 30-year-long partnership between EA Sports and FIFA.

It might be the end of the road for that partnership, but the developer wants people to know that it’s doing its best to wrap it up on a high note.

FIFA 23 is all about inclusivity – it’s “The World’s Game,” as it’s including two World Cups for the first time (men and women’s, the former in December, the latter next summer), and in another first, it also features women football’s leagues, such as FA Women’s Premier League.

On top of that, as it strives to be a welcoming environment for all the players, it’ll come complete with a training center including challenges and guides for everyone to learn the basics of the sport.

Finally, “the biggest FIFA game” is set to introduce cross-play.

Because of their different feature set, PS4 and Xbox One players will be hosted in a separate pool that is only available to them, but we’re told work is underway for them to join the bigger pool in the future.

This is a “perfect” version of how EA Sports sees football – a refinement of what has come before, rather than a reinvention.

That’s not to say there isn’t coming with anything new for fans.

Power Shot is a good example, as pressing R1+L1 before shooting makes sure you have a more powerful and precise pelt.

Similar to eFootball 2022’s Stunning Kick, this doesn’t guarantee you a goal from any distance, and you’ll still have to learn how to orientate it against the net.

With players like Haaland, we’ve seen impressive shots leaving goalkeepers with no hope, but it’s also true that less skilled forwards and midfielders will probably stick to reliable curve shots.

Speaking of new mechanics, free kicks and corner kicks have been completely revamped, and they’re now much more straightforward.

You can scroll through a list of free kick types, including knuckle and curve shots, and you only have to move the right analogue stick across a ball at your players’ feet.

Penalties have been through similar, taking advantage of the same minimal UI: players have to press the shoot button with the right timing in order for it to be successful.

Where to place your shot on the ball is still a matter of using your left analogue stick, but this is now extremely sensitive, so make minor adjustments if you don’t want to hit the post.

On top of that, FIFA 23 features a lot of little touches the most dedicated fans will instantly notice.

The game now offers more animations connecting all the different moves from the player – HyperMotion already added thousands of them, and the outcome was impressive, but this is yet another step forward.

With high balls, players will be able to stop the ball with their leg and start moving their body within the same animation, and it all feels incredibly life-like.

This early build showed how the AI struggles or even seemingly refuses to follow the opponents, however, which led to tennis-like scores in most of our matches.

Saying that, there’s still plenty of time left until day one, and this build was filled with stars such as Mbappe, Messi, and Neymar Jr. who often feel unstoppable even in real football.

Players themselves have been injected with noticeable new details, such as goalkeepers’ fingers now individually deforming anytime they touch the ball, or peeking when they’re covered, which also impacts their ability to dive in time to perform a save.

The pitch also now shows the marks anytime you perform a sliding tackle, which is a nice touch.

Running has also been specifically tailored to specific superstars, and players like Davies, Vinicius, and Mbappe will feel incredibly life-like when moving across the pitch.

Speaking of top players, left-footed footballers are now capable of actually performing their tricks with the left foot, something the community has been demanding for ages.

Over the next few weeks, we’ll have a lot more to share with you, in terms of what’s new and what’s changed in FIFA 23, and some of those changes will completely reimagine the way you play several of the series’ iconic game modes.

So, stay tuned for more, as EA Sports’ season has just begun.

Did you miss our previous article…
https://hellofaread.com/technology/who-is-the-highest-paid-twitch-streamer/

When is the General Election 2019?

Bizarre new laws in North East mean only ONE person can sing in inside...

House of Games viewers left ‘shouting at the screen’ after spotting glaring error with...

I’m A Celeb shock as Snoochie Shy brutally kicked out of camp – and...