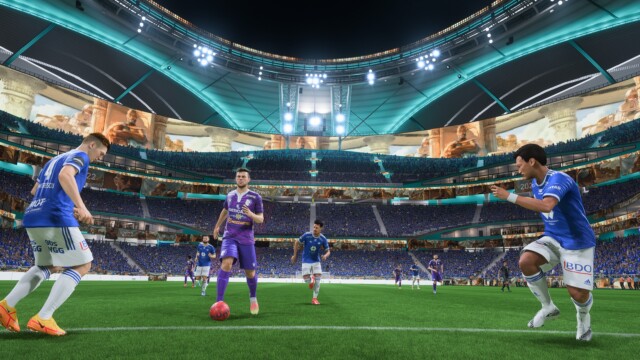 FIFA 23 will continue to sell FUT Packs, despite legislation being pushed forward in a number of countries banning the use of loot boxes in games.

Following new details of how the new FIFA Ultimate Team (FUT) will work, EA Sports has announced that loot boxes, known as FUT Packs, will remain part of the game.

FUT packs will return in FIFA 23.

FUT is the most popular mode in FIFA games, and involves building a fantasy team of footballers made up of various player cards.

Single cards can be purchased via a marketplace where users can buy and sell cards for both real and in-game currency.

EA Sports recently revealed that players on all platforms – except PC and Nintendo Switch – will now share a marketplace expanding their opportunities to purchase.

However, the rarest and most valuable cards are usually only available via FUT packs.

These packs contain a random assortment of players and items and have often been compared to loot boxes.

To negate this negative stereotype, EA Sports released preview packs, where users could view the cards before purchasing.

However, the ability to preview is limited per day, meaning the most avid players are forced to purchase blind packs.

EA Sports has defended the decision to continue the use of FUT packs, which are purchasable both with real money and in-game currency.

In a statement to Eurogamer, a spokesperson said: “We wholeheartedly believe that Ultimate Team and FUT Packs, which have been part of the game for more than a decade, are a part of FIFA that players love.

“Fans love that the game reflects the real-world excitement and strategy of building and managing a squad.

“Giving players the choice to spend if they want to is fair.

They went on to defend the use of loot boxes stating: “It’s worth saying that spending is entirely optional in our game, and we do not encourage spending over earning rewards through game play.

“FUT Packs work in just the same way whether they are paid for or earned, and most players don’t spend in game at all.

“For example, nine out of ten FUT Packs opened in FIFA 22 were earned.”

Belgium outlawed the inclusion of loot boxes in games in 2018, calling the practice “predatory” and likening it to gambling.

Other countries have also begun writing legislation to ban the use of loot boxes, including The Netherlands, Spain and Norway.

The UK recently announced that, despite other countries’ efforts to minimise children’s exposure to gambling, loot boxes would remain legal.

Fans joke ‘were they desperate’ as Meghan Markle & ‘handbag’ Prince Harry are named...

Hollywood actors unrecognizable in GTA 5 – but can you guess who they are?