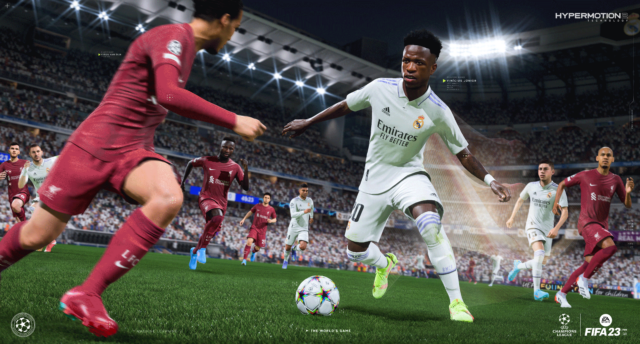 EA Sports has confirmed that FIFA 23 will not feature the Russian national teams or Russian clubs in the game.

The company previously removed all mentions of Russia from FIFA 22 following the invasion of Ukraine.

Some of the first looks at the latest FIFA game

This change was enacted even after the game’s release.

Speaking to Eurogamer, a spokesperson from EA confirmed that the ban would remain in place for FIFA 23.

“EA Sports stands in solidarity with the Ukrainian people and like so many voices across the world of football, calls for peace and an end to the invasion of Ukraine.

“In line with our partners at FIFA and UEFA, EA Sports will not include the Russian national team or Russian clubs in FIFA 23.”

The studio has been revealing more about the upcoming game over recent weeks.

French player Kylian Mbappé will return as the cover star for the third year in a row.

He will appear on both the Ultimate Edition and as the global face of the Standard Edition.

Chelsea’s Sam Kerr will also join Mbappé on the cover of the Ultimate Edition.

She will also receive her own Standard Edition cover in Australia and New Zealand.

This alternate cover will also be available globally via Amazon.

The Women’s World Cup will be playable for the first time in the series.

FIFA 23 will also expand its rosta of women’s clubs.

One of the bigger announcements is that cross-play will be available across different brands of consoles.

PC, PlayStation 5, Xbox Series X/S, and Google Stadia owners will be able to play together no matter which console or hardware they own.

As announced yesterday, the Standard Edition of FIFA 23 will be available to play from September 30.

Those who purchase the Ultimate Edition will be able to play three days earlier on September 27.

Did you miss our previous article…
https://hellofaread.com/technology/diablo-4-are-keys-free-if-you-get-the-games-tattoo/

Harry claims critics ‘won’t stop until Meghan DIES’ and likens himself to Diana as...