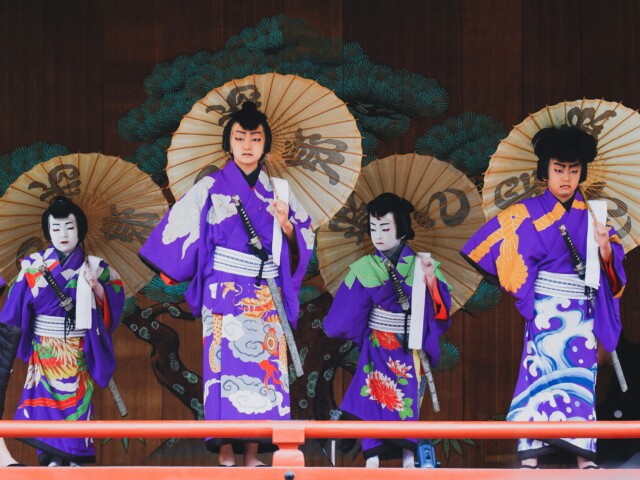 THE story of Final Fantasy 10 is being turned into a traditional Japanese play in the Kabuki style.

Kabuki is an extremely old type of Japanese theatre most similar in style to Western operas.

Children taking part in a Kabuki show in Japan

The dramas involve a lot of singing and dancing, as well as elaborate make-up and costumes.

These are designed to show emotions visually as well as through the dialogue and songs.

The story of Final Fantasy 10 features Tidus, a Blitzball player from a future metropolis, who is called on to save the world.

Blitzball is FF10’s fictional sport and fans are looking forward to seeing it recreated on stage.

Video games have often been adapted for the stage in Japan.

While there are some plays of video game stories, concerts based on the music are by far the most popular.

Nintendo franchises such as Mario and Zelda have also held successful concerts in Japan, America, and Europe.

However, it is unusual that a video game would be turned into such a traditional art form.

Few details were given though the first performance will take place in Tokyo at the IHI Stage Around in Spring 2023.

The cast has been announced and includes many successful Japanese stage performers.

The show will include images projected a full 360 degrees around the theatre.

This announcement comes at the Final Fantasy series 35th anniversary, as part of the celebration.

FF10 was initially released in 2001 for the PlayStation 2.

In 2013, it was remastered along with its sequel for release on more modern consoles.

It has seen a number of ports over the years and most recently it launched for Nintendo Switch and Xbox One in 2019.

According to Gematsu, the tenth entry to the series has now sold over 20 million copies alone.

Call of Duty has banned 350,000 players for ‘racist and toxic names and behaviour’