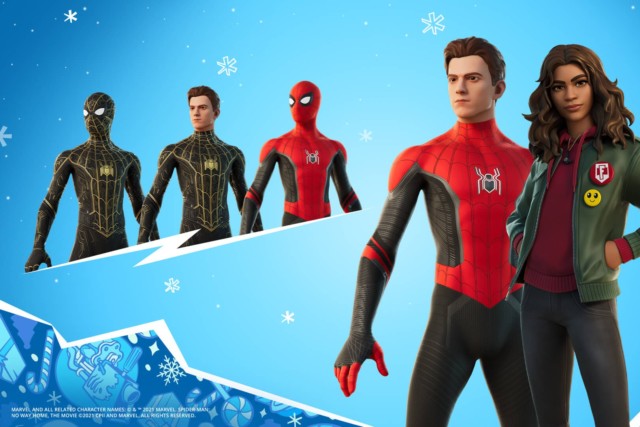 SOME new faces have landed on the Fortnite map in a bumper festive event.

Among the game’s annual raft of treats, players can get hold of Tom Holland’s Spider-Man, as well as Zendaya’s MJ.

Spidey is equipped with his emote, alternate suit, and backpack.

MJ also has her own back bling.

Each can be purchased for 1,500 V-Bucks, or part of a bundle for 2,300 V-Bucks, which includes a bonus Spidey bat thrown in.

But there’s a bunch of free stuff to be had for a limited time as well.

Among the 14 things to collect are two outfits.

One is a frozen version of Peely the banana dubbed Polar Peely.

Another addition is a character called Krisabelle who is dressed all Christmasy for the occasion.

You can only get hold of the Krisabelle outfit after unwrapping the six presents obstructing her.

Polar Peely is available after his giftbox thaws.

Other loot up for grabs include a Snowmando Board Glider and the Ffrosty Back Bling.

On top of this, there are some icy items courtesy of Sgt. Winter, including Chiller Grenades, Snowball Launchers to send exploding snowballs through the sky, Holiday Presents, and a Sneaky Snowman to disguise yourself.

You’d better get a move on though, as they’ll only be around until January 6 as part of Fortnite’s special Winterfest. Apple Music is taking on Spotify with a new half price plan with a twist.

And Snapchat has revealed it has given away a whopping $250million (£189million) to its creators over the last year.

Did you miss our previous article…
https://www.hellofaread.com/technology/xbox-series-x-and-s-back-in-stock-at-box-co-uk-in-time-for-christmas-how-to-bag-one-today/