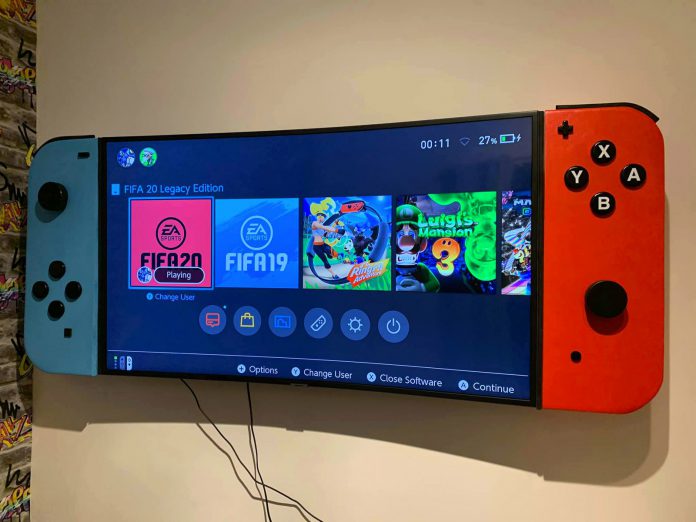 A NERDY Dad has made his son’s wildest dreams come true by building a giant Nintendo Switch on his bedroom wall.

Steven Beck, from Manchester, decided to give his seven-year-old’s room a makeover with a huge, mounted version of his favourite games console.

Steven’s creation has since gone viral, with many social media fans now begging him to make them one too.

Steven, a single dad said: “Jesse is on his switch all the time, he loves it.

“I’d already planned to do his bedroom up and I was able to get a lot of the materials from work.”

Steven Beck, from Manchester, decided to give his son Jessie’s room a makeover

The sides the of the ‘Switch’ are actually cupboards to store the console (middle shelf), controllers and games

The Switch is an unusual console in that you can use it handheld or plug it into your telly as a traditional gaming machine.

For his contraption, Steven built a cabinet that looks like a handheld Switch but which utilises a full-sized TV.

“Just copying his actual switch, I was able to use plywood to create shelves, so inside the structure, he could store the game discs and devices,” Steven said.

“The only things I really had to buy was the plastic and paint, and the vinyl letters for the buttons.

“When he saw it, I think he was a bit overwhelmed, he was so chuffed with it.

“Yet when he heard others were asking me to make them one, he begged me, ‘Daddy, let me just have this one!’ He loved it so much.”

Steven said that the materials to build the mount (not including the Switch and the telly) cost him just 71.

He created cupboard doors and the shelves from the plywood, shaping it to resemble the outside of the switch.

Steven then reshaped the plastic sheet to the buttons of the gaming device.

He made sure to pay attention to detail, adding the buttons that are on the edges of the switch with rubber seal.

Vinyl stickers were used to make the buttons look as real as possible.

Steven added: “It only took me a day and a half, over the weekend, whilst Jesie was at his mum’s, and that was mainly to accommodate drying.

“I certainly didn’t expect it to go viral, but there’s over 2.5k likes and 5k shares – I’ve even had people sharing it to groups, passing it off as their work!

“It seems with all the attention, there’s loads of adults who want it, to make like man caves and similar – it’s mad!”

Read our guide to the verybest Nintendo Switch games.

Find out all of the latestPS5 rumours.

What do you think of the massive Switch? Let us know in the comments!

Inside Wetherspoons pubs up for sale for £450k – they come with hidden features...

Kate Middleton and Prince William will be weighed after Christmas lunch by King Charles...

Amazon Luna is ‘Netflix for games’ with NO need for a console – and...