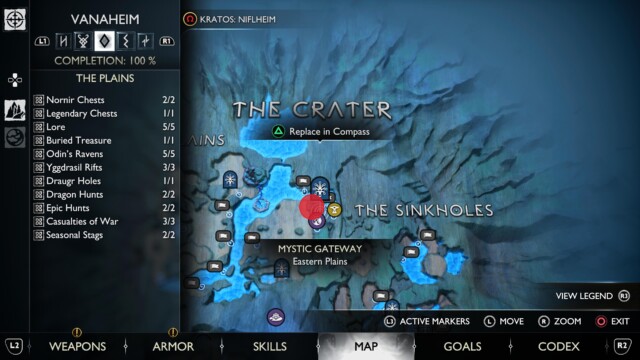 GOD of War Ragnarök is full of side missions, called favours, that give out some of the game’s best kit as rewards.

The Lost Lindwyrms favour will give you the spear upgrade Gale Flame as a reward for your efforts.

Much like A Stag for all Seasons, this will see you travel the world on the hunt for some missing beasties.

If you want to find the lost wyrms yourself in God of War Ragnarök, then read below to find out more.

After you’ve finished the main story mission The Word of Fate, return to Sindri’s House to have a word with Ratatoskr.

You can find him on the right of the realm travel door, and speaking to him will unlock The Lost Lindwyrms favour.

For this side quest you will have to find and capture six Lindwurms hidden throughout the world.

Before you go on the hunt, pick up the trap below Ratatoskr, which will automatically capture Lindwyrms when you find them.

The Lindwyrms can be found in Yggdrasil Rifts, and the six you need are in Svartalfheim and Vanaheim.

Where are the Lost Lindwyrms in God of War Ragnarök?

The first Lindwyrm-harbouring Yggdrasil Rift is located in Svartalfheim at The Forge.

You’ll need to use your Draupnir Spear on the yellow spot on a rock to swing over and access the rift.

Then you need to trap the Lindwyrm as it bursts out of it.

The next Rift can be found in Alberich Hollow in Svartalfheim. You will find it on a ledge directly after the Ormstunga boss fight.

Your third Wyrm is in Svartalfheim, on a platform between Alberich Island, and a small patch of ground in the river.

Use your spear to blow up some rocks near the ground, which will reveal a grapple point.

The Applecore in Svartalfheim conceals your fourth wyrm, near the realm travel door.

There is a yellow spot where you need to throw your spear, which will allow you to access this rift.

Onto Vanaheim, the fifth rift is in The Plains, north of where you fought The Crimson Dread.

The final wyrm is also in The Plains, at the end of a dead end.

Climb the ledge to the right of the realm travel door, to access it.

Now that you have your six new friends, return to Ratatoskr at Sindri’s House for your reward.

You’ll receive lots of XP, the Gale Flame upgrade, and some Lindwyrm scales.

Written by Billy Givens and Georgina Young on behalf of GLHF.

Meghan Markle and Prince Harry choose not to join the Queen for Christmas at...

I’m A Celebrity’s Beverley Callard says she was visited by ghost of Deidre star...

UK weather – Brits to enjoy 17C Indian Summer and its set to last...